I have not been posting much here or on other forums and for that and the hundreds of you who read these items every day I am sorry.  But fear not the reason for this will be revealed in all of its awesomeness on Monday 19th August.  Just you wait…fans of 15mm especially.

Moving on from that good luck to Scotland in this evening’s football match against England at Wembley.  Victory will go to the Tartan Army I am sure (errr….maybe not) but its the first time that Scotland have played ‘The Auld Enemy’ since 1999 and I remember that match well.  I also now realise I am since that match a father of three, married, a home owner, a successful author and car driver among other things…it sure does creep up on you eh.  I will post a comment after the match and let you all know what happened.

Lastly the above image is of a brand new design of Irn-Bru can of fizzy drink which has been produced in celebration of Glasgow’s hosting of the 2014 Commonwealth Games.  We may not have been big enough to get the Olympics but this is just as good as it is actually near enough to visit.  The can has a vintage design on it and it looks and tastes very nice too.

All in all its a great week…and the kids go back to school on Monday too. 🙂

While live is mighty fine by the sea in sunny Girvan, Ayrshire I do sometimes miss the city of my birth; Glasgow.  Following a recent conversation with a friend who has never been to the city and in trying to explain to them that when I was a ‘wean’ the dialect spoken there was often impenetrable not only to non-english native speakers but also the majority of the other residents of Britain!   While I speak reasonable ‘Glasgow’ I am long out of practise (except for creating Joccian dialect in Flintloque!) so I directed myself and friend to YouTube and Stanley Baxter.

Long, long ago the great Scottish comedian Stanley Baxter did a series of sketches, quite hard to get these days it seems, where he acted out typical scenes of the city and then after delivering the lines in ‘Glasgow’ he would then switch to a proper RP English accent to give a translation in the style of a travel programme.  Have a look and enjoy…even if you have to run it back a couple of times!

Oh and yes all Scottish people can speak proper English when they want, but what would be the fun in that.   Differences and diversity make Britain the great nation it is today.

Well done to Andy Murray who has just won the Wimbledon 2013 mens final!

It has been seventy seven years since a British win at that most English of tennis events and in tense match the better man won.  I am sure that endless inches will be written about this but I just wanted to post up my own congratulations on the day.  But how will be BBC report this great victory…we shall see. 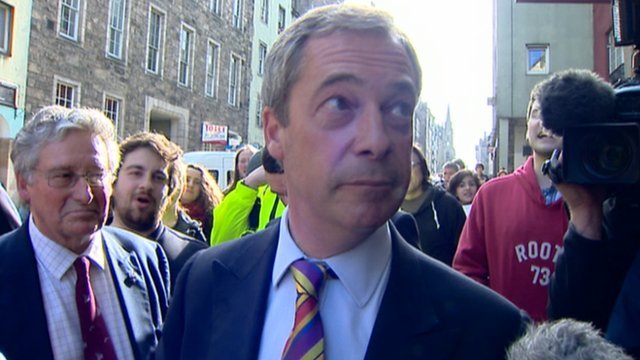 I heard on the news today that UKIP leader Nigel Farage was rather brutally heckled in a pub in Edinburgh.  As I said when I began the new ‘18.09.14‘ thread on my blog I would be posting up the occasional thing to do with Scotland and the referendum for independence as and when something came up.  Well its been quiet but this little nugget got my interest today.

A short while ago UKIP seemingly astounded English voters as they took a significant share of the total vote in the local elections across England.  While they did not get a great deal of seats they did establish themselves as a party to be interviewed, asked, taken seriously and so on.   It was really only a matter of time before Mr Farage came to Scotland and ‘something’ happened to him.  Reading into the news story on the BBC it seems that another protest group were on the scene at the same time.  I will not comment on the actual events as I was not there and accurate information is not forthcoming on the BBC for the fine details but it is worth noting.

It is true that there is a tiny minority of people in Scotland who ‘hate’ the English, it is true that there are a tiny minority who also believe the world is flat, who will beat you to a bloody pulp for not supporting their favourite team of over paid ball dribblers and so on.  My point is that I hope no one watching the BBC thinks all Scots are like this.  You can find a small group of lunatics to support any cause you like if you turn over enough stones.  Mr Farage appealing to the First Minister Alex Salmond to ‘root out hatred, watch out for those who will burn the Union Jack’ and so on.  I looked up the interview from this morning on Good Morning Scotland where Mr Farage hung up mid interview..he did seem a little distressed.  Comedy if not so serious.

Not much to do with the Referendum but if you have ten minutes have a read on the link supplied and watch the clips too. Well the date has been announced.  The date which will see a vote here in Scotland over whither or not we remain part of the United Kingdom or become once again a separate sovereign nation.  On the Eighteenth of September Twenty Fourteen so about a year and a half from today.

I am not political and I am not a great believer in politicians either but this is more than a policy choice or party spin this is likely to be the most important vote I will ever cast and so to that end I am going to keep a distant eye on the campaign as it moves on.  The ‘Yes’ and the ‘No’ sides and as the date approaches I will focus more on it.

There are many questions to be asked and I have no fixed opinion myself as of today.  Am I in favour of Independence?  Time will tell.