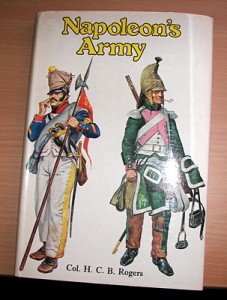 My copy of ‘Napoleons Army’ by H.C.B Rogers published in the early 1970’s but still in print and available widely.

I had another book review planned on a science fiction paperback I just finished but I got passed a note yesterday that one of Alternative Armies customers who is also a member of the Notables Yahoo Group had asked if I knew of a good book about the French Army in the Napoleonic Wars.  Know of one I said…I own a load of them!  Sure I could help.   But which one to choose?  The notable in question had said it must be in English which narrowed the field and that it should have formations and structure of all arms of the army so that narrowed it again.  Lastly that uniforms were to be included in the book.  This took me back to one of my favourites namely ‘Napoleons Army’ by Colonel H.C.B Rogers.

This book has all that is needed.  Divided into sections including a history of the battles of the period the French fought in followed by Infantry, Cavalry, Artillery, Engineers & Signals, Administration, Medical Services, Imperial Headquarters.  Then two accounts of the Third Corps at Auerstadt and in Poland ending with an Epilogue.  Each section has full information on structure, uniforms, weapons, ranks and more.  Importantly each section ends with a list of sources allowing further reading and proving the knowledge of the author.  I doubt anyone except a half mad games writer would need more information (though I own many of the books quoted as sources!) as this book is packed.  My own edition is nearly two hundred pages of easily read text with line drawings.  I have used it many times when creating material for Flintloque.

While my own edition can be had second hand or on ebay etc if you look, there is a current edition which is easily had for less than ten pounds.  Here is the Amazon UK link for it.

If you want a solid title on the French Army under Napoleon then this is the one.