Since August I have been watching the progress of Eli Arndt’s tiny Fleet Scale Mecha designs and I am pleased to be able to say that Eli giving me the chance to get them into production has turned out brilliantly.  This month will see them released in their own part of the 15mm.co.uk website along with a special Barking Irons Online article for them all about their presence in USEME and how to make best use of them overall in gaming. 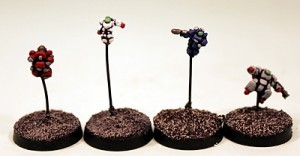 These are some of the smallest wargaming pieces I have ever dealt with and on average each of them is 6mm or less in size.  That said some clever mold making and production sees them in white metal which was then painted by Eve Hallow. They will be released as single miniatures and as value sprues which are a little cheaper.  There are nine different, and they are different, mecha and from the paint schemes I asked Eli for Eve has done a super job (I heard him gibber when he handed them over that never again…too small!).

O.G.Joel has a draft of a 6mm rules set for USEME and these will fit in lovely.