There is just a week to go now until the release of the 777th Croaked Line and since I posted the second part of the three that make up this arc about the Undead Toads a lot has happened.  In the last week or so I have taken delivery of two painted sets, both by pro-painters, each with a vision of just what these new and unique miniatures should look like.  There is no official uniform or flesh tone for Zombie Todoroni as it has never existed before so there was a free hand for both Rob Alderman and Eve Hallow to do their thing on a set each.

I have many images of the two sets but I am saving most of them.  Here is one shot of each of them so as not to disappoint or to spoil next week.  Eye Candy! 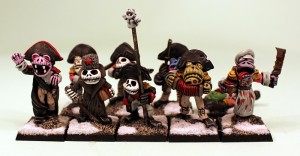 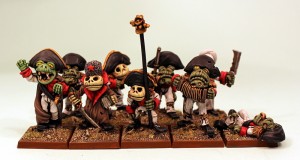 Along with the official release on Alternative Armies which will consist of a core set, trooper blister, recently dead blister and full unit too I have arranged with Craig Andrews over on Barking Irons Online to provide news of the release and an article about the characters of the set with lots of great images and a scenario entitled ‘Deep Freeze Toads’.  A bonanza for Flintloque players who have suffered my lack of attention at the expense of 15mm sci-fi of recent months.  I will not gush for long here in this post as this will happen in the article but I adore both these Flintloque sections.  I adore Rob’s clean lines and crunchy flesh while Eve’s use of bright skin and blood spatter combined with stark black and white skeletons is superb.

So until next week..which do you prefer?  Which will be the official uniform for the Croaked Line?

Its been a great build up but my role here is all but done…its Barking Irons turn now.