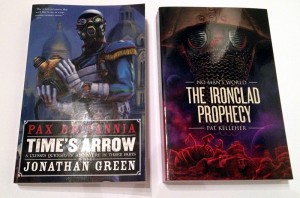 Two new titles from the postman!

Sorry for the bad pun title but I could not resist it.  I came home this week to find a wee package waiting for me from Amazon (too lazy or busy to get to the bookshop, you decide which) containing two titles from my ‘wanna read’ list.  I treated myself for the extra hours I had put in on Slaughterloo Redux over the last month and am now faced with the choice of which to read first.  I actually want to read both so I might try and read them at the same time, having done this already with a novel and a history book over a couple of days.  So what are they?

Times Arrow is the elventh novel in the Pax Brittania series by Abbadon.  Set in an alternate universe it is fantasy fun adventure in a British Empire which steam dominates the globe.  This is the eight book (yes I own all of them) with the hero Ulysses Quicksilver who could quite easily have been a member of the League of Extraordinary Gentlemen taking on the hun, the foe, the alien and the monstrous for Queen and Empire.  The plot of this one concerns Paris, murder and a trip to the Moon.  Streampunk adventure of the highest order.  While the plot alone makes me want to read it, as a writer, what also interests me is that this tale was actually penned in three separate parts and published on Kindle before this paperback edition was collected.  I would recommend starting with Unnatural History though as its the first one.

This is the second book in what is now three for Pat Kelleher placed in the ‘No Mans World’ setting.  I have the first one and Ironclad Prophecy has been out for a while but I wanted to read them in order so I got this one when I saw an advert for The Alleyman which follows it in the series.  Essentially the plot concerns the infamous 13th Battalion of the Pennine Fusiliers who simply vanished leaving a huge crater while fighting on the western front in WW1.  A mine you suppose…nope, they have been transported to an alien world where all manner of creepies wait for them.  The premise interested me as original and entertaining plus the author puts it across as a true tale by way of ‘letters and accounts’ from the period and a hush up by the British top brass.  Again begin with the first one Blackhand Gang, otherwise it will make no sense!

I might not get around to posting reviews of these titles due to time constraints but I should be able to put a micro review in the comments below…perhaps that will work.  Anyhoo…if this catches your interest go out and get reading with total abbadon!