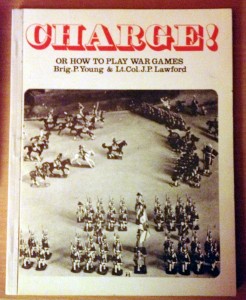 Back before Christmas my good friend Bob McAlister and his family sent myself and my own family a package all the way from their home in America (see this previous post).  I promised not to open it for a few days but what with work and family I kept it until the big day at Christmas and I stuck to this revised promise like a dog to a bone.  Indeed I often passed the box and my hand reached out…but no!  Waited.  When opened there were many goodies in the box for my Good Lady and my wee three too but I will stick to the gift sent to me.  I present to you a short review of Charge! or How to Play Wargames by Brig.P.Young & Lt.Col J.P.Lawford published by Athena Books in 1986.

Vintage wargaming books from before the ‘age of commercialism’ when it was a hobby for gentlemen and the idea of science fiction and fantasy on a table was truly outlandish are a pet love for me and I own quite a few including many of Fetherstone’s titles such as Complete Wargaming (which is better overall than this book but also far more in depth).  I had wanted ‘Charge!’ for a while but copies were expensive so Bob had done me a real favour by getting me a copy far cheaper in its native North America.  Charge! is written as a set of ‘horse and musket’ rules with attached scenario and introduction.  Despite thirty years passing the rules look very solid and I threw some dice and used my Flintloque figures for pieces and they worked well.  A lot like the kind of rules I like to write, flexible, fun, hobby based and no more complex than they need to be.  The book is split into two parts as far as the rules go, the basic game and the advanced game.  This is something lacking in British titles of this period and is something that has come over from the USA in my generation.

Charge! is not a book about Wargaming as such, it is a book of wargame rules that despite what the author says is best suited to wars of the high 18th century and not earlier or later periods.  I enjoyed reading it and will revisit it in the future too.  As far as I know this book is out of print but it can still be had for those who want to seek it out.  If you can get it cheaply, or from a good friend (!) then I recommend you do.  Thanks again Bob.

2 thoughts on “Charge! or How to Play Wargames – A book from Bob McAlister”