Its not often that I spend an entire day on one central task but today was such a day.  Today, with the assistance of my good lady, I photographed all of the professionally painted releases for the next three months for 15mm.co.uk.  This came to more than three hundred images of roughly seventy unreleased miniatures from the HOF, HOT, SHM ranges crafted by six different designers.  We take photographs very seriously with the aim of showing the actual miniature in the best light and with no software trickery involved.  So many hours of thousands of watts of light and positioning figures resulted in some great shots but left me with eyes like a Blood Hound!

The vast majority of the new miniatures are in the HOF 15mm Science Fiction range and all but a handful were painted over several weeks by Eve Hallow.  He is an excellent miniature painter with an eye for colour.  Its also his birthday this weekend so I will be standing him a Lady Juniper or two at the local hostelry and giving him a wee gift but for the moment I will tell you of his first gift.  He is not only a miniature painter but an aspiring sculptor too and his first miniature will be hitting the SHM range this week… coincidence or what…on his birthday weekend.

I am not allowed to show you all the images I took (don’t even ask…you would burst with the thrill of it!) but I will sneak out a few in the coming weeks and for now I give you what is coming out this week.  The Jelly Cube by Eve Hallow, the Criat Mercenary by Will Grundy (another first!) and the icky Biomorph by the excellent Eli Arndt.  Enjoy! 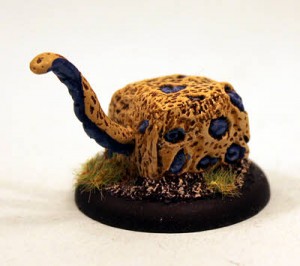 For Scale with Human Cultist 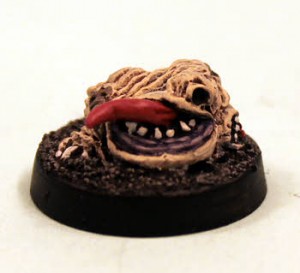 Eli’s Biomorph from the front 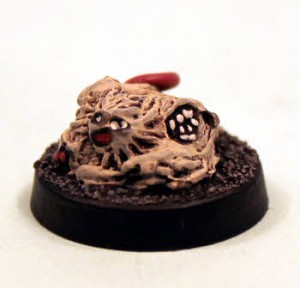