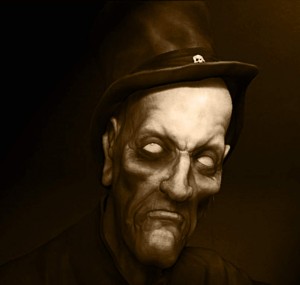 Today is Eve Hallow’s birthday.  No one knows how old he is or even if he still lives at all.  For in the depths of Saturday night he did emerge from the Crypt to make deathly merriment upon the streets of old Girvan town.  Now I only managed to snap this quick photo of him (oddly I took several but the rest of the film was burred or over exposed) but merriment in great store he did indeed have.  I witnessed such sights as him raising the dead, placing curses upon cute kittens, eating the crushed road kill from the very gutters while at all times his bony feet at the end of his ever so long legs tapped to a fiendish and yet silent rhythm.   Those ladies of the night whose gaze fell upon his ghastly countenance were turned with immediate effect into aged hags as his cackling laugh echoed off the stone walls of the rain lashed streets.  I only barely escaped with my life intact by distracting the clickity clack spiderish man with a thrown handful of Flintloque miniatures in the opposite direction.

Praise be to the very elysian fields that it is only once a year that madness descends and the Eve Hallow creature is allowed upon the streets without it being the witching night of Halloween.