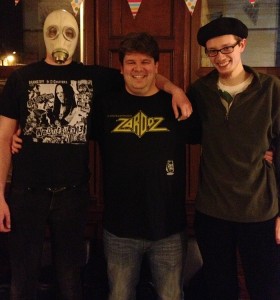 Its been a hectic week for it was time for the ‘creative staff meet’ hosted this time by me here in Girvan in Scotland.  As you can see from the picture above myself (centre…ain’t I pretty!), Sam Croes on the right and the crypt keeper himself Eve Hallow on the left (yes, he does manage speak with that on!) had a jolly time of it.  Being face to face allows for a lot of conversation and ideas to flow quickly and they did.  It did mean that I have been out of the office all week but I do promise to catch up on, what I am told, is all of the fifty plus emails for me that are awaiting answers.

As well as work we did do some sight seeing too as it was Sam’s first time here in Ayrshire so I took him to see Alloway and the land of Burns along with some scenic sights.  This was made easier by four dry and sunny days in a row which for Scotland is a rare thing.  Eve did not come along…sunlight does not agree with him strangely…

Sam was kind enough to give me some pressies from his homeland of Belgium and I gave him some goodies from here as did Eve Hallow.  I have not pictured all of the presents as I drank some of them and ate others but I will review the excellent looking comic books and the music too.  Time should not be so pressed now for me. 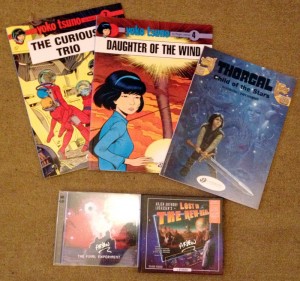 Gifts from the lands of Ghent!

Its rare to have so much talent in one room and it was a blast and I can’t wait until we all meet up again in London at Salute 2013 in April.  In a time of instant communication and ever faster computers sometimes you just can’t beat working shoulder to shoulder on exciting things for the future of miniature wargaming.  Eve say’s he might even turn up to Salute without the mask or his shovel for digging up corpses!