Its been a manic weekend here in Girvan.  Not really for me as I remained snug at home all except for Friday but more on that in a minute.   But for the rest of Girvan and indeed the whole of South West Scotland the weekend has seen some of the worst weather that the area has seen in many years and me personally since  I have moved here some eight years ago.  You can look at the news for the full story but essentially high winds from Thursday evening peaked across Friday into storm conditions and when that was combined with snowfall it led to gusting blizzards that caused no end of trouble.

Across Friday afternoon one road after another was closed and the snow fell on and on.  I decided to leave the office an hour or so early expecting I might have to deal with a bit of snow on the ten mile drive down into Girvan.  I was wrong.  It was actually the scariest drive of my life to date as a driver ( I have only been driving a year so that is not saying much but read on).   As I drove the snow got deeper until I passed a delivery van that had broken down due to stalling.  Following this the wind whipped the snow into drifts and a tundra like gale and my view of the road ahead was reduced to little more than ten feet.  A mile of this saw a small convoy of vehicles form with me at its midst.  I kid you not that about three miles out from Girvan the brakes in the car stopped working, they froze or were packed with snow.  I had to use the gears to slow and the handbrake to arrest the increasing number of slips and skids that the car underwent.  I picked up a passenger too, a driver whose vehicle had been left at the side of the road, I did not want to leave him out in that.  By the time I reached Girvan the police had closed the road to traffic and there were cars parked on the roundabout that marks the edge of the town.  I sat in the car for a while watching the weather and waiting for my hands to stop shaking before heading for my house.

I found out the next morning that virtually all of the region had been brought to a halt.  In fact Girvan was home to several packed coaches and at least a hundred HVG’s which parked where they could (see the image above).  I am pleased to report that the people of the town turned out somewhat in force with tea and hot soup for the stranded and every hotel room was filled.  Several people it seemed suffered accidents on the main road down the coast too, but I don’t know more about that. 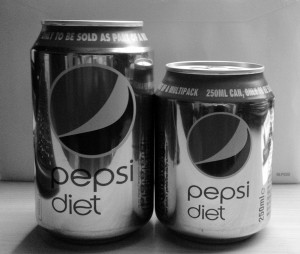 Big Can, Little Can

Anyway with the nasty weather out of the way the post I was going to put up was an idle muse about smaller sized cans of fizzy drinks and if they were actually better than the larger more normal size but I can’t summon up the energy so I will keep it short for ‘ya all.  The Food and Drink Agency here in the UK back in 2010 introduced legislation trying to make companies reduce the size of their sugary drinks cans to combat obesity.  I noted this at the time and ignored it but I picked up a case of Pepsi in this size this week and it came back to mind.  You can see the two sizes above, I like diet drinks as coffee makes me feel unwell, but did the smaller can make me drink less?  The answer is a cynical no.       Typically while working I will drink two cans a day, one in the morning, one in the evening but with the third smaller can I have found this number increase to five or six.  This is not due to concious thought, just desire as I type ever onwards with email and such.  They are just too small to satisfy.  As a result, the equally expensive, but smaller, cans are consumed at three times the rate of the other ones.  As I said cynical…combat obesity or just sell more under the old three choices adage…’Reduce Size, Reduce Quantity, Increase Price‘…seems to be the first one to me.

2 thoughts on “Big Can, Little Can..Weather a Blizzard”