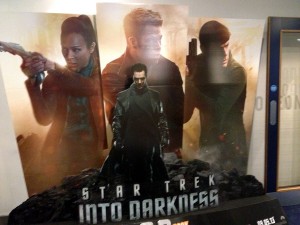 See a big cardboard standee…I was there, I was!

I boldly went last Saturday night…to the cinema…to see Star Trek into Darkness.  My recent trips to the cinema have been a sad, sad disappointment really.  Poor equipment, over priced (very), lack luster films and a feeling of regret that I wasted thirty pounds and a rare evening off work on them.  But not this time!  Into Darkness has had mixed reviews which if you have not seen it you should NOT read.  I avoided every ruddy advert, critic and everything else as I really wanted to see this movie and did not want anything spoiling it.  So was it any good?

YES it was.  I really enjoyed it.  The plot was thin in places but hey for a blockbuster it was fine, the 3D effect actually WORKED (that is a first for me).  It was superbly shot and rendered and the action sequences were very good.  Star of the film no doubt was Benedict Cumberbatch as Khan, he was excellent as Sherlock and excellent again leaving the other actors way behind.  But for me it was the last thirty minutes of the movie that made it superb and not for anything you would expect.  I have always been a fan of Chris Foss the sci-fi artist and it seemed to me that the film lifted his view of the universe and plonked it down wholesale on the Earth of the future, cars, buildings, fire and rescue vehicles.  From art to a moving reality. Brilliant.

Should you go and see it.  If you want a good film for science fiction fans that is about more than the USS Enterprise then yes.  A die hard Star Trek fan…not so sure.