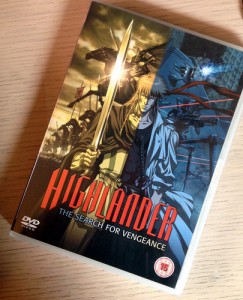 Its been a while since my last review of any film or especially my second great love (after wargaming and well my wife, so make it third great love!) anime from the far east.  So last night I perused my pile of unwatched anime and foreign language films on DVD and selected one.  You might remember I picked up a pile in HMW back in February this year and only now are they reaching the top of the list to watch in the free time I have.  I had planned on keeping Highlander the Search for Vengeance for watching with a friend but Friday night found me alone after being ditched by all and the sundry too; so mate less watching alone it was!  So was it any good?

Well yes I enjoyed it but it has little resemblance to the seminal film of the 1980’s from which it takes its name.  Its Japanese through and through and made by Yoshiaki Kawajiri of whom I am a big fan but its far from the best anime out there.  The story is fairly thin concerning Colin MacLeod and his quest for vengeance against Roman general Marcus Octavius.  Marcus kills Colin’s life love Moya in the 3rd century AD in Northern England and swearing revenge for this Colin is promptly killed by Marcus but lands up on Celtic holy ground where his immortal resurrection is witnessed by the ghost of a Celtic Seer, Amergan, who then accompanies Colin as he tracks Marcus through the next two millennia.  Colin fails again and again to kill Marcus and the narrative ends up in post-apocalypse New York for a cyberpunk showdown.  I will not spoil the ending.

The best things about this anime are firstly the voice acting which is spot on and secondly the flash back scenes to my beloved Scotland (it is Highlander after all) and to Rome and Japan during the Tokugawa period which are by far the best parts of the animation.  Yoshiaki Kawajiri delivers on his Fist of the North Star style with intense action, over muscled characters, busty women (no gravity in this world!) and so on.  It is far superior to the awful 1990’s Highlander TV series and as far as I know its canon.  I must also mention the music which is really good and sets the scene moving from the ancient world to the near future with ease.

What lets the whole anime down is the repetition of cliché and sequences.  In seems in places that the action set in the past was what the directors and animators wanted to do and the near future material was a ‘do we have to?’ bolt on later.  Its also not classic stagecraft with dialogue that will make you cringe in your seat.

Overall if you are a fan of Highlander at all then seek this out and watch it.  If you like sci-fi like I do then give it a try too.  If you liked  Yoshiaki Kawajiri’s other works then also see it.  For a few pounds give it a try!

4 thoughts on “Highlander the Search for Vengeance – Review”