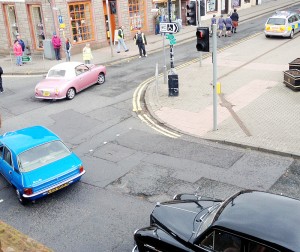 The parade begins with classic cars!

All week it has been the annual ‘Civic Week’ here in Girvan and normally I make an effort to go along to events and take my three little ones with me.  Support the community and all that, rattle the tin and spend some money.  But this year due to a combination of work and weather I actually missed all but two of the events that went on.  You can learn more about the whole week online but the two main events for me are the Parade and Gig on the Green. 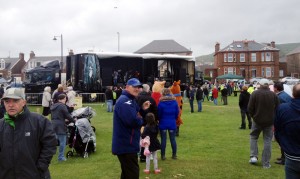 I am currently fiddling with a new USEME series title so that took up my attention as did the incessant rain that has doused South Ayrshire for the past while (yes I despair, I live in the wettest place there is!) but I got a snap of the start of the Parade which you can see above.  Attendance was down but then it was a rainy, windy and dark day more suited to February than June but people soldiered on.  I then went along to Stair Park where a live performance stage was set up among a few fairground rides and stalls.  I felt sorry for all concerned as the wind pulled at them and distorted the live music being played.   I stood a while and listened and even went back later but it was a sad occasion compared to previous years where sunshine and picnics for hours were the normal faire.