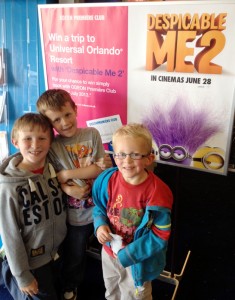 The Thinker, the Poet and the Warrior enjoy a treat!

Last Saturday I took the family to Ayr to see an advance screening of the brand new animated movie Despicable Me 2.  A week before the actual release I saw a chance for an early summer treat and took it.  I expected the cinema to be full as it was only going to be shown twice for one day.  But in reality it was nearly empty…perhaps the frankly insane pricing of the tickets put people off.  Let’s just say I could have bought nearly a dozen copies of the first film on DVD for the same price (or a couple of hundred 15mm miniatures).  Note this was a standard price, not inflated for the advance screenings.  So how was the film?

Actually it was really, really good.  I enjoyed the first Despicable Me movie a lot and this one continued the story and the level of fun and comedy with no let up.  It reminded me a lot of a 1970’s James Bond film with the gadgets, gags and honesty that is missing from such live action films now.  In fact the trailer for the upcoming Monsters University made me think of an 1980’s Police Academy type film.  Perhaps its a pattern…

If you enjoyed the first one or you have small children and can stand the price then its well worth seeing, five stars!

p.s. click on the links in this post.  Both official websites have a lot of them and my children enjoyed looking at them both.

2 thoughts on “Despicable Me 2 – Early Screening!”