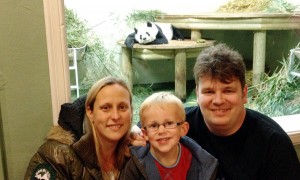 Yesterday was a field trip day for a wee group from Girvan.  Myself and my good lady along with the little warrior and some others went to Edinburgh Zoo.  Its a long trek crossing the whole central belt of Scotland but its basically a straight line on the motorway for most of it so while not the most amusing of drives I got us there with no problems.  So why the Zoo?  Well for a couple of reasons.  Firstly the Warrior has never seen wild animals and secondly the ruddy Panda’s!

In case you lived on the moon you might not know that Edinburgh Zoo took delivery of two Panda bears from China a while back and this sent the Zoo into the stratosphere in terms of its popularity.  People love Panda’s, I mean they really love them.  In the kind of way that I just don’t understand (I am sometimes considered odd by certain kinds of people).  Above you can see me with my lovely wife and the Warrior posing for a photo (I actually want this one blown up and on the wall at home) with the bear behind.  From what I picked up from the lecture being given to the tour group (demand is such that only twenty or so people at a time are let into the building to see the Panda’s in their two separate rooms, there are only sixteen hundred or so of these animals left in the wild and it is falling all the time.  I am not surprised.  The Panda it seems is a problem child of nature.  It is extremely anti-social with its own kind (hence keeping them on their own) they are only in season for one 36 hour period a year and they suffer an appalling rate of fake and aborted pregnancies.   They sleep sixteen or more hours a day.  They cannot cope with ANY change in their surroundings.  They only eat bamboo along with the occasional apple or carrot.  Yes, I actually listened to the lecture as well as cooing and taking pictures.   Lovely creature don’t get me wrong but I have low expectations of anything but extinction for it. 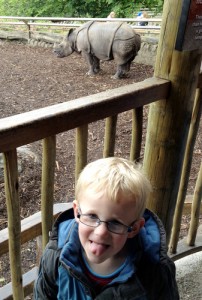 The Zoo was a great day out and it was fantastic value for money too.  After the Panda’s we walked the circuit and saw the rest of the animals (too many to list) but a special mention firstly to the Sumatran Tiger.  I adore Tigers (don’t want one for a pet though) ever since seeing a Bengal Tiger as a wee lad.  Seeing it was the personal highlight of the day even though it was asleep at the time.  After this the Rhino.  The Warrior was fascinated by this slow moving mountain of muscle and natural armour.  Above you can see him pulling a cheeky face while its back was turned! 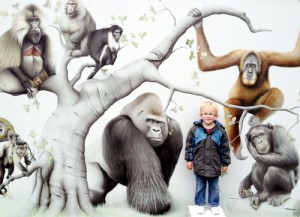 Among the rest of the Monkeys!

I found it very interesting that the most information about any of the animals at the Zoo was to be found in the primate areas especially those of the Chimpanzee’s.  I have a good grasp of evolution and the reality of how we as a species came to be on this wonderful and diverse planet; but I did learn a few new things.  For instance latest research shows that we Humans did NOT evolve from Chimps but from an as yet not found common ancestor some six million years ago branching out to Chimps, Gorillas and the excellent Orangutan’s too.   I have, at many zoos, come face to face with almost all the captive species of ape and each time their similarity to us strikes me more and more.  From the largest to the smallest their eyes, hands, fingers and faces and behaviour.  Watching Spider Monkeys just put me in mind of the last pre-school party I went to!

So all in all an excellent day out.  I hear rumours that Tiger Cubs are now to be seen in Inverness-shire…its not that far a drive surely.  Maybe next time.

p.s.  A quick note to the rest of the group I went with.  To Ethan and Terri, two teenagers who were as bright, keen and well spoken passengers that I have ever had in my car.  Shine on you two!