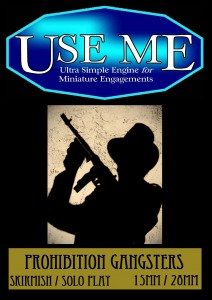 Top of the World Ma!

There are some more USEME Titles in the planning stage over at 15mm.co.uk and while I have posted about my own title in the next three (Alien Safari , delayed I know!) I have said nothing about the others; so here it goes!  Provisionally titled UM015 USEME Prohibition Gangsters this booklet presents rules for two scales (15mm and 28mm) in wargaming the period in American history when booze was illegal and tommy guns the norm.  That is the 1920’s and 1930’s.

This is not a period I know much about really so I was delighted when Bob McAlister over in the USA told me he was keen to write just such a title.  With some assistance from his good lady and playtesters UM015 has shaped up as a solid and themed set of rules.  Its the first set of wargame rules Bob has written that has made it to published stage and he is rightly proud of this achievement.

Skirmishing is the name of the game and the idea is that small groups of Cops, G-Men, Molls, Gangsters, Hooch Runners and others fight it out over objectives such as hidden stashes, nightclubs and speak easies, warehouses, the open street, flop houses and more.  As with most USEME titles its ten or so characters a side but you can use more plus the solo rules engine is attached.  In fact Bob handed in a manuscript that was too long when his two scenarios were included so these will be given away free on the website and also included in the paid for PDF version.

As USEME’s are budget titles for gaming fun I opted for public domain photographs and so on for the internal pages of the book and the cover is a clever bit of dress up fun on a sunny day from the creative commons licence on Flickr.

I feel that in terms of the way it plays this vision of USEME is most like UM003 USEME WW2  written by Omer Golan but without the armoured vehicles and aircraft of course and a lot more car chases.  This title will be published later this summer.