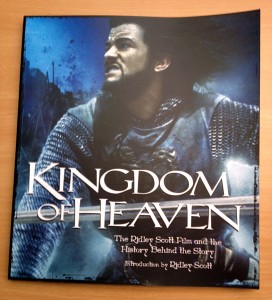 Taking a stroll through a local pound shop a couple of months back with a good friend I stopped in front of the ‘all books £1.00’ display and among the tacky crap (who wants a PJ and Duncan 1993 fan sticker book honestly!) I spotted a pile of thick glossy movie tie in books.  Ah ha, I thought and had a dig through.  While most were for chick flicks and kids movies there was one that caught my eye.  The Kingdom of Heaven story behind the film and the making of the movie introduced by Ridley Scott. 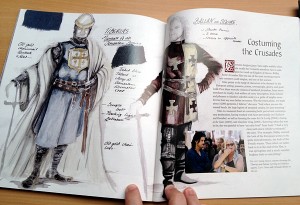 Costumes used in the film

In its pages there are three main parts.  The Introduction, the Kingdoms of the Holy Lands (Part 1) and Swords and Stones (Part 2).  The introduction by Ridley Scott discusses the notion for the movie while part one has sections firstly on the history of the actual Crusades then their leaders followed by how you dramatise such stories and then lastly choosing the cast for the film.  It is the second part that most interests me with sections on computer graphics, scene setting, costumes (see above), weapons, artillery, heraldry and more with plenty of images to go along with the descriptions.

For one pound I just snapped it up!

Books like this are always useful.  I might get something out of it for historical wargaming or even ideas for science fiction or fantasy too.  As for the movie to go with it…it left me cold I seem to remember.