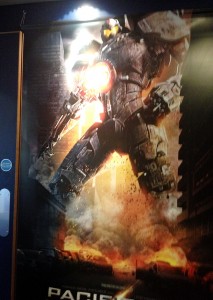 Two weeks ago I got the chance to be treated to a showing of Pacific Rim at the Odeon Kilmarnock.  It has taken me some time to get around to posting this review of the film basically because I have been mired in the shallows of the summer school holidays, birthdays, house guests and other things which have slowed me right down on non-essentials (see I do this blogging lark out of love not money!).  But now here we are and the film is still very much on at the cinema so its still relevant.  A full 3D experience in a modern and this time fully functioning cinema (my experience last year with Dredd was interrupted by technical problems in the same cinema)…how was it?

As normal I tried to avoid trailers, adverts and especially reviews of the movie before going and in this I was successful.  Aside from a TV spot and the basic idea I knew nothing and went into it with an open mind.  A mind that was frankly very excited to see the film since I really like giant robots, giant monsters and the whole anime roots and premise of Pacific Rim.  I also really like the films of Guillermo del Toro too and Hellboy as well.  So my mind was looking for comparisons for Pacific Rim and while some people have used Transformers and the 1990’s version of Godzilla they are wrong the true father of Pacific Rim is the seminal Robot Jox from the 1980’s (which you should watch if you like mecha) and it delivered big style.

The giant robots and the monsters were superbly rendered on screen and the action set pieces were at times really tense and nail biting too.  Characters are often a let down in summer blockbusters but not in this case as the cast played off each other brilliantly.  From the names of the ‘Jagers’ to the names of the pilots there was a tongue in cheek humour.  The film had heart and drive while dropping the nod to its source material.  At no point in the cinema did I feel bored or did my attention wander from the screen and while you could have written the ending on a postcard and mailed it from minute one of the performance it did not matter.  In short it is a very good film in its own right before you get to the genre and in terms of the genre it is one of the finest of its kind ever filmed.  Go and see it!

In terms of wargaming there is plenty of scope for giant robots in scales such as 15mm with 1/100th and 1/72nd plastic kits…heck even a few 1/60th if you want really big.  Gives me ideas! 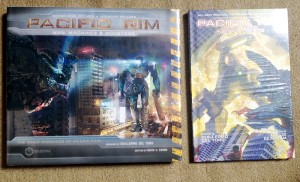 Finally I got a package this morning ordered just after seeing the movie containing the two books that go along with the Pacific Rim film.  Excellent!  Once time allows I will read them and hopefully post a wee look at each of them.