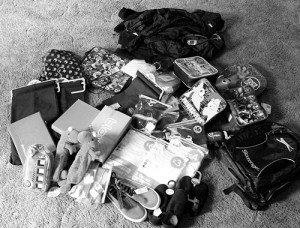 The summer holidays are over and the rain continues to fall in Scotland (well it was actually a good seven weeks all in for weather this year) and my three are going back to the land of education.  Aside from this being the first time for the youngest, The Warrior, it also means the need to buy yet more school uniforms and supplies.  So off I went and bought what was needed.  I looked for bargains, for special offers, for value and then bought it three times over.  I got all that was needed and it took most of a day to do it.

Well what can I say.  Despite looking for the best offers and making a killer saving on the older two boy’s shoes the cost was more than last year.  I know there is a third child now but its more than that.  The cost of everything was up.  I ain’t moaning, I am just saying as the song goes.  I am glad I don’t have to do this more than once a year (but items do need replaced regularly!).  Above you can see most of the pile, not all of it but it gives you an idea spread out more than six feet across.

Is the new gear for school starting less affordable now.  My opinion is that despite the claims of major retailers it really is.  I won’t say how much I spent but it has left a sizeable hole in my pocket.  What do you do if you have four, five or more children…share shoes or hope the government aids you is all I can say.

Moan over…back to the positive once more!

4 thoughts on “Getting Ready for School…less affordable now?”