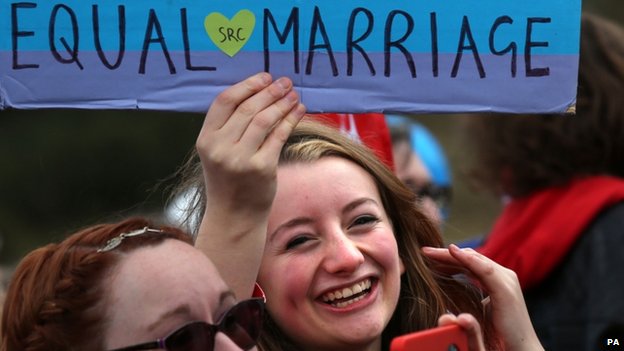 A bill which allows same-sex weddings to take place in Scotland has been passed by MSPs in the Scottish Parliament. MSPs voted by 105 to 18 in favour of the Marriage and Civil Partnership (Scotland) Bill. The Scottish government said the move was the right thing to do but Scotland’s two main churches were opposed to it. The first gay and lesbian weddings could take place this autumn. Religious and belief bodies can “opt in” to perform same-sex marriages. Ministers said no part of the religious community would be forced to hold such ceremonies in churches.

That is the first paragraph from a BBC News post online HERE.  Its a good day to be Scottish.  My country just got a bit more liberal and bright.  Another piece of medieval darkness removed.

As for me I am all for love be it of any Human kind and I hope to get some more blog posts up soon.  Its been a mad hectic week for me but the reasons will come clear soon enough.