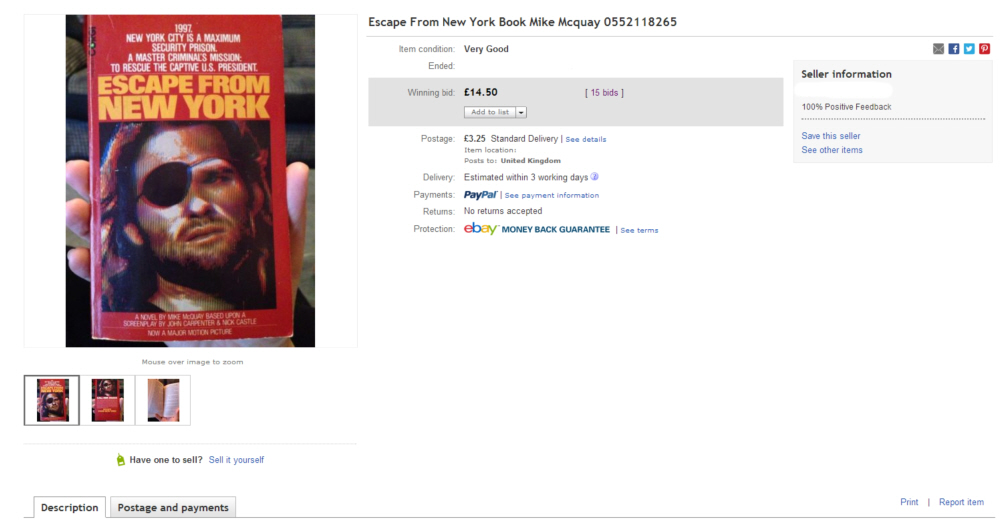 Its been a long search and at times a painful one but at last I own a paperback copy of the Escape from New York novel by Mike McQuay.   A close run thing (much like the Escape story itself!) with many bidders and a final price that might make you sweat but which is still less than buying a copy through a book dealer it has just arrived in the mail.  I will do a review of the book once I read it but you might ask for now..why are you interested in a novel about a film that is thirty years old?

The answer is Snake Plissken (played by Kurt Russell) the character has had a big impact on me for as long as I can remember.  Sure the film is a little ropey and in places it drags but it and its characters have real presence that many newer movies do not.   Snake is an anti-hero living in a nightmare police state future America with a military past hinted at and a fame that he does not want.  The book is meant to expand on Snake’s background and give weight to tag lines in the film.  I sure hope it does.  The novel is significant because it includes scenes that were cut out of the film, such as the Federal Reserve Depository robbery that results in Snake’s incarceration. The novel provides motivation and backstory to Snake and Hauk — both disillusioned war veterans — deepening their relationship that was only hinted at it in the film. The novel explains how Snake lost his eye during the Battle for Leningrad in World War III, how Hauk became warden of New York, and Hauk’s quest to find his crazy son who lives somewhere in the prison. The novel fleshes out the world that these characters exist in, at times presenting a future even bleaker than the one depicted in the film. The book explains that the West Coast is a no-man’s land, and the country’s population is gradually being driven crazy by nerve gas as a result of World War III.  Awesome!

I actually do have a plan beyond the obtaining and reading of the book and that plan is to try and get 15mm.co.uk to back my idea of more HOF codes that are suitable for the EFNY setting.  We already have the SFA which will stand in for the thuggish guards and we have HOF55 (pictured above) which will, with more packs coming this season, stand in for gangers in the prison city.  But we don’t have what I yearn for….a Snake for the nest.  A miniature like that could be put into many projects and wargaming settings.  Perhaps a Maggie and a Cabbie along with a Duke and a Hauk too.  Sometimes I get my way but with 15mm.co.uk’s customer base wanting it too…well perhaps this post will assist in that.  Email me on sales@15mm.co.uk if you are as keen as I am.  Eye Patches are cool!

7 thoughts on “Paper Plissken is Mine!”