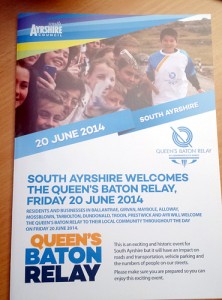 While work prevented me attending the Queens Baton Relay today as it went through Girvan on its way up the coast and through South Ayrshire (well local big wigs get paid for standing in the sun and I don’t hey ho) my good lady got me some pictures and a little booklet.  You can see the cover of the booklet above and a picture of the baton carrier who had done some good work for local children at Girvan Hospital below.  It has been a lovely week of sunny weather and it shows in the pictures.  Such a blue sky and the heat made for fine baton walking conditions. 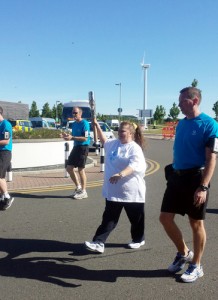 My eldest son as a part of his class attended the event (one of the last things he had to do before his primary / elementary schooling ends for good in a week or so) and was given the distinction of carrying the flag for his class’s chosen commonwealth nation South Africa.  He had a smashing time and a well deserved way to end his last little school year.  Top of the class and a thoroughly nice child who is turning into a young man that I am rightly proud of to my core.  Have a look below and check out that springing step and grin! 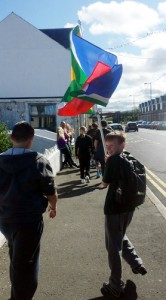 As for the Baton Relay itself I really don’t care about it but it was nice to see some crowds and smiling faces in the town.  Interestingly enough when you read the baton booklet a sizeable piece of the text is given over to ‘Business Branding’.  While it urges that everyone have fun and benefit from the relay it makes it clear that again and as always know your place.  Don’t be naughty and try to make a few quid off the back of the games (just like the Olympics in 2012) as copyrights and brands are jealously guarded.  While I agree and understand this after all big companies have paid big to advertise and we want to keep it clean it does make me grin falsely when I consider that a local person baking little cakes for 50p with the word’s ‘Queen and Baton’ on them to sell for an hour in their little town will be coshed all the same.  Heck if I was to say the name of my employer and put it in this posting I would be breaking the law….gotta love sport eh.

Well got to get on….