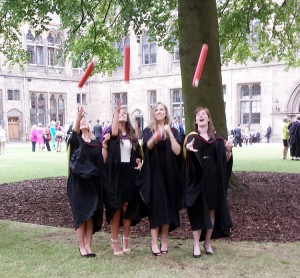 I was invited to Glasgow University on the Wednesday of this week to be a part of my sister in law’s graduation from the university.  I was honoured to be selected as tickets are rare and it meant I would once more be able to walk the halls of my old haunt and enter the illustrious Bute Hall for the ceremony.  By an odd coincidence it was twelve years to the day after my own graduation from the university in exactly the same ceremony but this time I was able to see it from the outside without the gown and the mortar board. 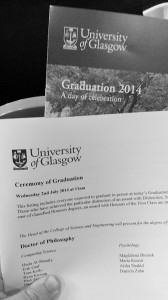 The programme of events. We were lucky with a mild and dry day and it was really fantastic to see all the smiling faces full of accomplishment.  I will admit it was a lot of deja vu  on my part but I will avoid going into details.  I had not been back to the university since 2002 but I keep in touch with letters and email.  Its a place that holds and radiates its five hundred years of scholarship and its formed the minds of thousands who have shaped the modern world.   I have done a lot since I graduation not least the public work I am known for but I have gotten married, bought two homes, had three children, travelled, wrote, thought and fought the good fight. 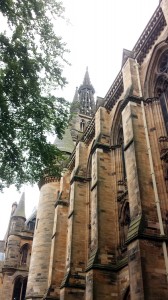 A view of the side of Bute Hall to give an idea of the scale of the stone work.  My sister in law Kirsten Loy was the star of the day and trust me it only seems like yesterday when she applied to go to university.  While some might argue the benefit of further education I can tell you from my perspective that you go in one person and come out another better one more suited to the rapidity of the world now and better to deal with it.   So congratulations and I am so proud of you.  I wait to see where you go now!

I will end with the above photo of Kirsten on the left and my good lady on the right.  I am so lucky to be part of a world of such beautiful and talented women.