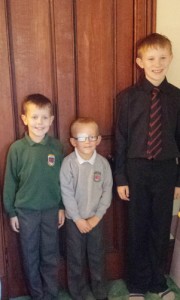 Today was the start of a new school year here in Girvan for my three sons.  The Thinker, The Poet and The Warrior donned their new uniforms and took up their new jackets (it is Scotland so it was cold in August!) and bags and headed for the class rooms.   This is an occasion for celebration every year but this year there was an extra event as my eldest was now attending secondary school going from a big fish in a little pond to a minnow in a lake.  So he headed off to Girvan Academy while the smaller two went back a year up to Girvan Primary.  As you can see in the image here they looked very smart indeed which is due entirely to my loving wife and not I who has now not shaved in near a week!

As is the duty of all good fathers I asked each how their first day went.  The replies were as follows starting with the youngest The Warrior.  He said that school was cool, that music is now his favourite subject and that having a class smaller than last year made him happy.  So a happy lad.  The middle lad, The Poet, was more reflective and while musing over a new book of tales published in conjunction with the school (in which he had a full entry) said that he hoped it would be pacer quicker than last year as he liked a challenge.  Now the eldest The Thinker looked all grown up in his shirt and tie and what did he think of his first day at a new school?  With a weight of years he said it was a big change with many more subjects and a lot of new faces to get to know.  He was most taken with the idea of responsibility in that he is now allowed out for lunch into the town as well as the canteen.

A big day then and it was a pleasure to see once more what fine lads they are and how they will make their parents justly proud in years to come.