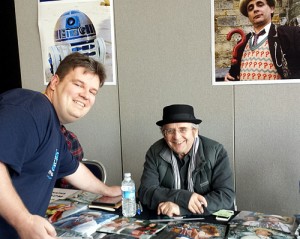 I had a great day on Saturday from the moment I woke up to the moment I went to bed late on after watching the taped new episode of Dr Who.  Among the highlights I can share with the public the brightest was my trip to Collectormania 2014 in Glasgow.  Its not often I get enough time together to do something like this but the trip had been planned for two weeks and I was raring to go.  Why you ask..well for the chance to meet two childhood heroes of mine and the chance to get some new t-shirts too. 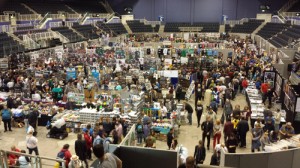 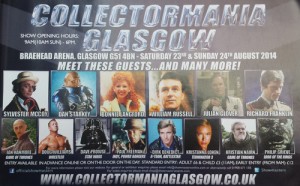 I got the shirts and as you can see above it was a smaller sized event, nothing like Salute at Excel in London, but that was good for me.  It meant that there was virtually no que to wait in for an autograph and it meant that you could actually spent a bit of time talking to the person too.  Sylvester McCoy is a really nice person and it was great to be able to speak to him.  I did not mention the seventh Doctor once rather it was more a meeting of two men from the former region of Strathcylde.  However for my good lady the star of the show was Dirk Benedict who took a real shine to her!  After that he was quite happy to talk about the A-Team and his time as Starbuck too.

We got our autographs which my eldest son who came with us found quite funny.  For you see I put no stock in religion or celebrity or anything else that is beyond my normal grasp as a Man.  I take each on its own merits but actually conversing with these two put a grin on my face that he found amusing!  I might well go back next year.  I missed Sophie Aldred as she was only there today and not Saturday.  Shame but there is always next time.

So I will finish on a last picture of my good lady with The Face Man as he was and still is known.  Hands off mate…she’s mine! 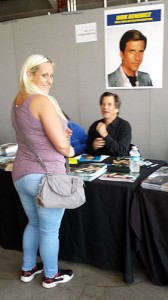