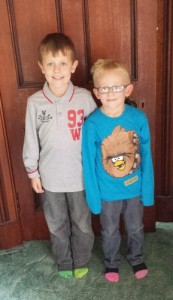 Parent’s Evening.  Its an event that most parents don’t look forward to.  A couple of times a year you attend the local school at a given time and then the teacher tells you all about what your little darlings have been up to in class.  What they have really been up to, not what they have told you after school each day.  This was the event for me last night in Girvan.  Now that only two of my three are at primary school for the first time it meant only two appointments rather than three which meant less running about making to a room on time.  So how did the Poet and the Warrior do….

How they did was a ringing endorsement of the parenting that myself and mainly my good lady made an effort to keep to.  Rewarding effort and initiative and punishing bad behaviour while giving the children as much responsibility as their ages can allow and not treating them as anything less than capable within their own limits.  It works.  It really does.  Both were given top marks with remarks made about their healthy attitude to life and high scores in tests and group work.  I may have to rename the Poet since his tendency towards mathematics and numbers is becoming ever greater and the Warrior is so sociable that his name may also change.