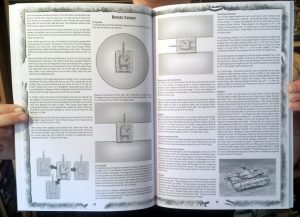 “This last decade has seen suffering on a scale not seen for centuries since the obliterating horror of the Aldan Crucible. In the twenty years since the murder of my father in rightful battle and following this my abduction as a child, Prydia has been aflame and never more so than in the this decade now closed. None know the true count of this conflict but it is in the billions of needless deaths. All these deaths needless and the result of the ambitions of the rebel barons and their leagues. Now, here, in the liberation of Bosworth IV we have reached the high water mark of the Leagues. They will rise no more. Edmund Bluefort, leader and lord of the League of Canlaster, is dead this very day in fair joust. With his death and the returning of this planet to freedom I send out this message across all the systems in the Precinct. Freedom is coming and the darkness will be lifted in the months and years to come. As long as it takes, you will all be liberated and returned to a worthy peace. Coming from the skies the red and white of the Prydian Army will drive out the rebel barons and their lackeys one planet, one settlement at a time. The flame that threatened to burn us all and reduce us once more to savages will be put out. Already it gutters and fails. That which has been ruined will be rebuilt and restored. Prydia is rising once more and now more than ever before we must stand united against threats that may come to us from beyond our own stars. This civil war will end!”
Princess Daphne Cyon addresses the Precinct from Zone 62 New Bosworth 4330 IC

You can read all about my latest book Callsign Taranis online on its page of the website. I am very proud of this expansion book and though it took longer than hoped or expected to chisel to a finished monolith it is now crossing the globe to all those who made the choice to order it up early. Thank you! I only wish to add some pictures here of what the book likes like internally. Its pages and their quality. We decided to get the book printed in Scotland and went for a high quality paper and bind meaning Callsign Taranis will stand up to the rigours of long term use by wargamers.  It is a thing of beauty and that is important and I think we will do this again.  It costs more and means we make less money but at the same time the customer gets a ruddy good product and we keep people in work here.  This also applied to the larger format pre-print with new cover art of the original Patrol Angis book to which this new one is the expansion sequel. 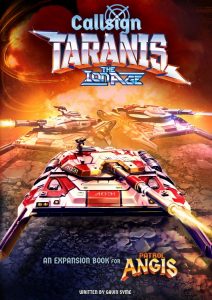 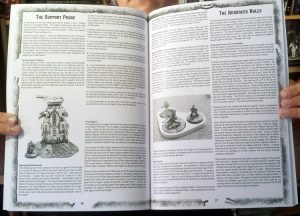 “In Callsign Taranis you will find the expansion rules covering the use of Vehicles in play as well as Structures and other bolt on mechanics. There are also game statistics for the vehicles of the Prydian Civil War and additional skills, equipment and items for your troops. Following on from Patrol Angis is part two of the Prydian Civil War background. Also in this book is the Support Phase and the Between Games development of your forces. Rules for how to play larger games of Patrol Angis and how to generate random terrain. A bolt on section for Building your Forces with Vehicle and Mixed platoons. This and more all in a packed sixty four pages! 15mm Wargaming!”

The Ion Age is my own baby. My forth child as it were. It is by a long margin the smallest compared to Alternative Armies and 15mm.co.uk but it is growing and between myself and Sam Croes we are creating something special, something unique. 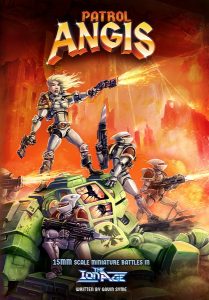 I have made the choice that although I will not be posting much here on my own site I will be putting up short articles with my own look at some of the books and products I am involved with closely. What I have written or been impressed by. If you want to see what I am up to most every day then look to the right and follow me on Googleplus and or Facebook. My own site is for musing and mutterings beyond these.