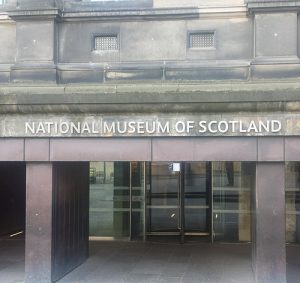 In a fairly rare break from my normal life of work and family I took a few days off to treat my good lady to a birthday treat trip to Edinburgh at the weekend just past.  We had a really nice time and the weather held up for us too.  I want to share a few things we did (not all of them as I do not want to bore you or make you faint!) while there.  The main thrust of this posting is the National Museum of Scotland which we spent a very enjoyable full morning inside (it would have been longer if there had been seats in the tea room for a lunch date too!  But alas too busy) and here are some photos I took of objects and such that most interested me. 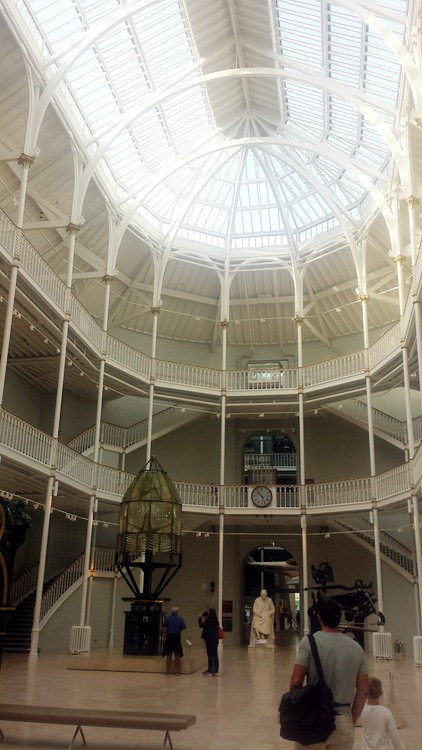 Above is the view to the right of the main group floor of the museum and it was a delightful surprise to see the natural light entering from the glass ceiling of the nineteen century iron structure and around its floors.  To the left you can see the main light taken from a late Victorian light house.  Below is a photo I just had to take of a small part of a mid twentieth century ‘Atom Smasher’ used by several different universities in the 1950’s..sadly not in use. 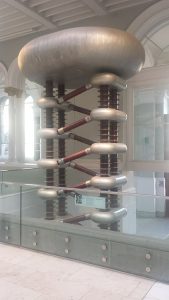 The museum is divided into several sectors which are represented upon each of the floors as you ascend.  With each telling a rolling story they are excellently done and while the nature element does not especially interest me the Great White Shark hanging from the ceiling upon invisible wires was actually rather scary and you can see it below.  I was more interested in the civilisation (read as Mankind but sadly that is not a word allowed anymore) and the science hall. 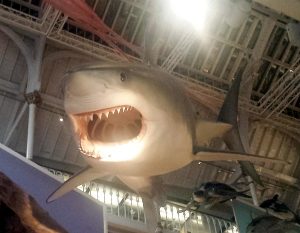 A superb presumably solid gold Japanese planetsphere which dates from the seventeenth century which shows the night sky not as pictures but as a series of straight lines.  The photo does not do this object justice at all and the level of detail is amazing and its finish is undimmed by time. 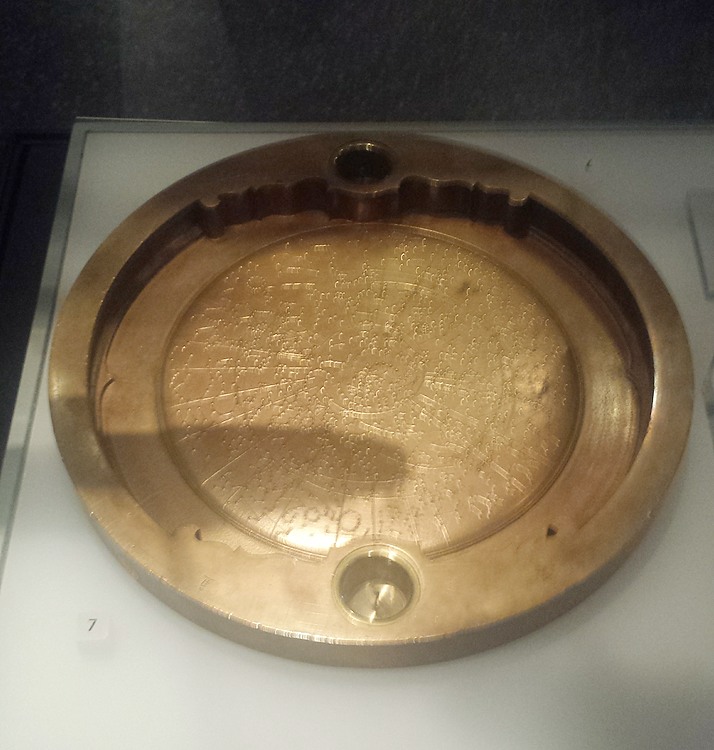 The next two photographs appealed to the Flintloque writer in me.  The uniform of Thomas Cochrane worn upon the ship Liberator which is well worth looking into and an oil painting by Arthur William Devis.  The fall of Seringapatam and the death of the Tipu Sultan (not actually killed by Richard Sharpe!) in 1797 which was an event one of my favourite British officers was part of; Major General David Baird. 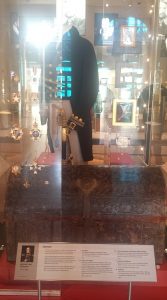 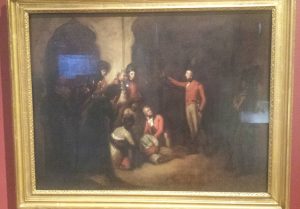 The reality of biological sciences was brought to life for me in the next room in the form of the actual (I checked!) Dolly, the world’s first cloned animal in 1996.  For more on Dolly follow the link here as it is a fascinating and important area of research.  After this was Wylam Dilly locomotive which while not being anywhere near as famous as the ‘Rocket’ is one of the oldest surviving machines there is from the early age of steam and rail along with Puffing Billy. 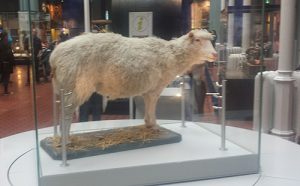 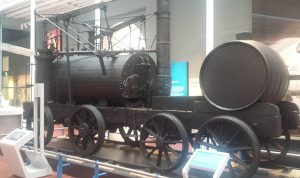 The resourcefulness of human nature and in war caught my eye with a suit of armour plus weapons from Kiribati entirely made of coconut fibre.  While utterly useless against any firearm and most bows as well it does stand up to crushing and impacts from wooden weapons rather well.

One of the real highlights of the whole museum was the change to read up upon and actually see (yes, I touched it, naughty me) a part of the acceleration cavity assembly from CERN which as you will know is the place of the Large Electron Positron Collider.  Twenty seven kilometres of underground tunnels to smash electrons and positrons together.  I find this actually more impressive than four thousand year old tombs and such as it is the future and an incredible feat of engineering and physics.  Peter Higgs nobel prize was ensured when the ring proved the existence of the ‘god particle’. 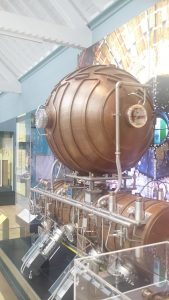 After all this I took the time to get a snap of the view down to the entrance foyer from where we had started our experience in the museum.  An excellent idea for a half day visit and for children lots to do as well.

Edinburgh was mobbed with tourists…I mean really busy…so I gave up trying to get into any other events or places and instead just went for a sunny stroll in the park getting a good shot of the castle upon the rock from an angle not normally used by TV reporters or postcards and such. 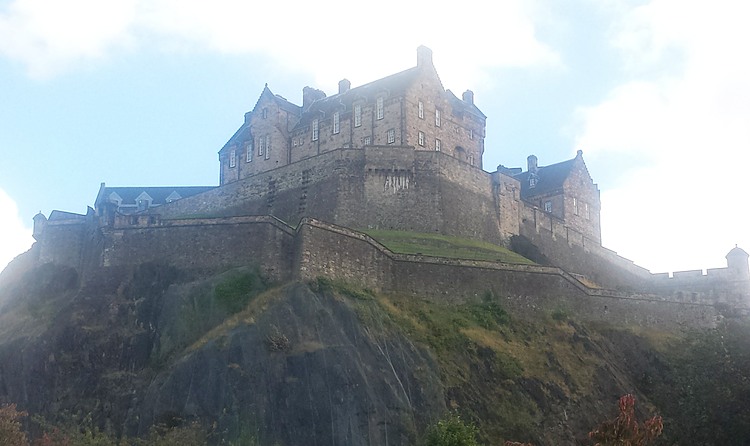 Lastly a shout out to a great traditional Scottish pub that does excellent food and service too along with some superb ales.  It is small but try to get a table and a late lunch at the World’s End pub at the foot of the Royal Mile. Friendly and with a great atmosphere I took a few photos to show you firstly what I had to drink (Saltire is not easy to get in Ayrshire) and then the outside wall of the pub with its origin tale. 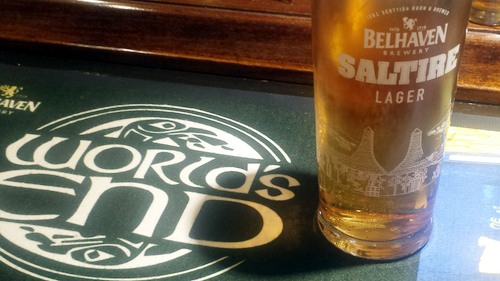 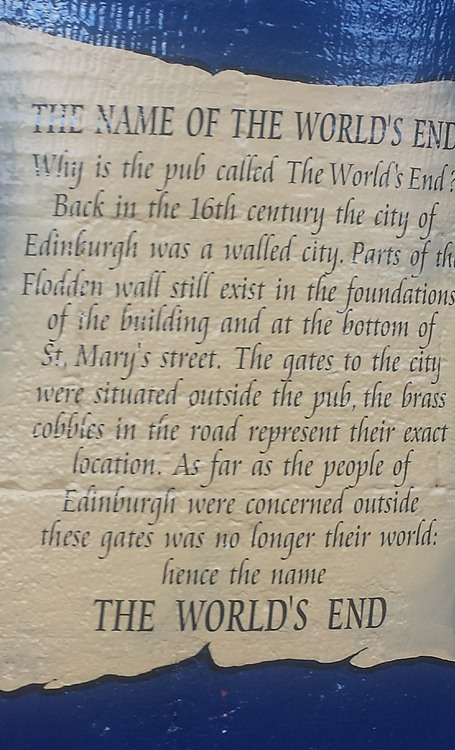 Thanks for taking the time to read this and if you get the chance I do recommend heading to the historical capital city of Scotland for a weekend.  I had the choice between this trip and possibly Madrid.  I did not get the heat but I got a bloody good time!