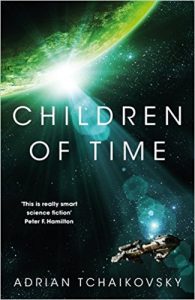 A short look at Children of Time the winner of the 2016 Arthur C. Clarke Award
by Adrian Tchaikovsky which I have just finished listening to on Audible.

Desperate to find a new home amongst the stars, the last remnants of the human race which persist in the ruins of an earlier stellar empire are thrown out into deep space. Hundreds of thousands  in cryo asleep aboard a colossal colony ship until a habitable planet is located. Eventually they discover a world which was ‘successfully terraformed’ by Professor Kern during the gone era of the Empire.

Left Abandoned by Humans, this new planet isn’t the unoccupied Eden they had hoped for and is populated by two other forces who fight for power and territory.  They are not men..not even close. 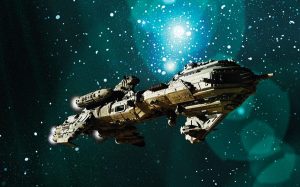 Until Children of time the author had really focused on Fantasy and hadn’t turned his hand to writing science fiction novels. It is a move I’m glad he made as Children of Time is not only a rewarding, memorable novel but one that can take its place amongst the finest science fiction.

The story alternates between the humans on board the colony ship (Gilgamesh) and the changing creatures on the terraformed planet. These creatures have been given a helping hand to evolve after a nano-virus that was meant to uplift monkeys instead finds the most promising of creatures on the freshly terraformed surface. We get to see how creatures such as spiders and ants could evolve in a short space of time (relatively speaking). The book travels forward as these creatures evolve while aboard the Gilgamesh the opposite happens. Devoid of the knowledge required to effectively repair or improve their ship, life for the humans gets difficult.

There is a sense of wonder and immersion, being carried along on an alien world with hosts both familiar and strange at the same time. The novel also has the grand vision that is a characteristic of a Peter Hamilton’s space opera. It’s a combination that works perfectly managing to describe the evolutionary steps of earth-like creatures in a realistic fashion. Its clear the author has a fondness for insects.

The way that future technology is described is both modern and creative. This distant view of our culture and society, while a small part in a much larger story, really strikes a chord. It’s the way that the uplifted race of creatures are described that sets the book apart though, the juxtaposition between human and non-human is both reflective and distinct.

Children of Time Explores themes of religion, evolution, sexism and the nature of humanity along with what it takes for a species to call something “God”. The book also provides an effective example on just how evolution can work and just what makes one species superior to another. It’s a mind-blast, thought provoking story just full to the brim with ideas. The book that essence of the classic science fiction novels, that sense of wonder and unfettered imagination but combined with this is the charm of a writer who really knows how to entertain, how to spin a good story. Essential science fiction and a book not to be missed.