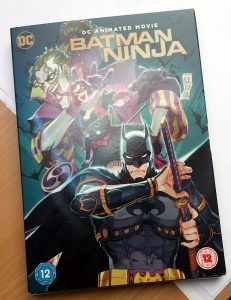 A new DVD release arrived on the door mat last week and with the Standard Grade exams over and my own work schedule having a gap in it my eldest son and I sat down to watch Batman Ninja.  An eagerly anticipated anime title which I had pre-ordered.  I had avoided reviews and opinions upon it.  We put it on and watched…

“Batman and a cast of villains including The Joker are transported back in time to medieval Japan in this ground-breaking anime feature.” 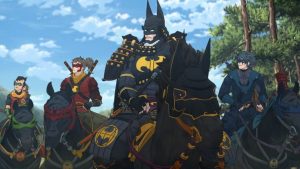 Our own feelings upon it were that the animation was superb with backdrops much like paintings from the Edo period (Japanese history is one of my passions) and that the action sequences were very well done.  The voice work was fine but the Batman character fell short of his regular brooding menace.  The plot was thin but rather than use this as a negative it was actually for a reason in my opinion. 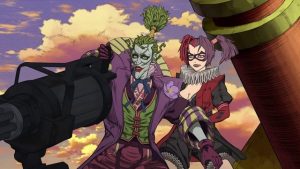 The anime was made upon of scenes.  Each scene focused upon giving homage to a type of anime style and setting.  Across the span of play we had ninja films, Kurosawa tribute, water colour tragedy, giant mecha fight and more.  The plot simply acts to move the scenes forward.

The film can come off as strange and oddly paced if you do not have a grounding in the culture that is comes from.  It is a Japanese film made for that audience and it shows in the dialogue and seemingly odd choices by characters.  Overall we enjoyed it and if you want something that’s a bit different from the usual DC animated stories here’s an answer for you.