It is June now and that means time for the annual Carrick Lowland Gathering which takes place around the same weekend each year at the Victory Park in the middle of Girvan.  The Gathering as it is known has been a fixture of life in Girvan for a long time and it encompasses a lot of fun and festivity.  This year was no different on that score but it was an improvement on last year. 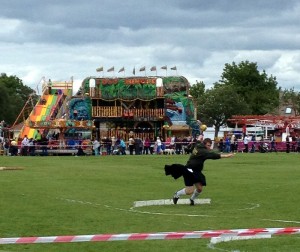 Throwing the Hammer at the Lowland Gathering!

A sunny Sunday lunchtime saw the Syme clan arrive and while I trotted about and had a few chats my good lady took some photos, the best two are in this posting.  The Gathering has a highland games event that includes hammer throwing, Highland Dancing and it has a Pipe Band championship too.  Alongside this are other smaller events and charities and a number of fairground rides and many stalls selling everything from traditional sweets and clothing to local wares like tartans and curling stones.  There are also workshops on how to dance and play the drums and pipes. 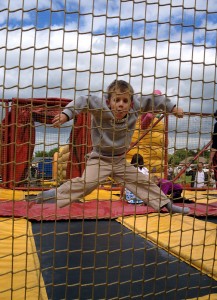 The Poet enjoying the Trampoline! (He is jumping, it just looks like he is tied up in the ropes)

Unlike last year it was dry and sunny which I think increased the turnout to more than two thousand all in and it meant more traders turned up too; there were no spare pitches left.  The pricing of everything was reasonable too and as always it was great to see the town busy and the children having fun.