An event that has seemed so far very far away and often irrelevant to life in Girvan has just passed through our little town.  The Olympic Torch procession made it’s way through Girvan today  just after seven in the morning.  Myself and the rest of the family were up super early and out in the street to see it. 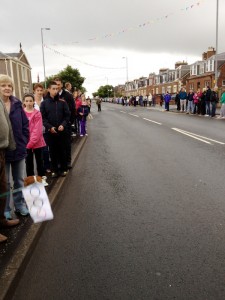 The Crowd Gathers in the Early Morning

Luckily the rain held off and the turn out was very good.  Many of the local children were there and most were waving self made torches and little flags.  The procession began with the normal clearing of the roads and then a number of corporate sponsored vehicles handing out their wares, playing music and generally trying to incite an atmosphere into a slightly damp and sleepy crowd.  It worked well though and by the time the local runner (a man from the village of Mossblown which is up past Ayr) went by everyone was cheering and waving madly. 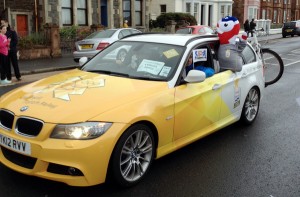 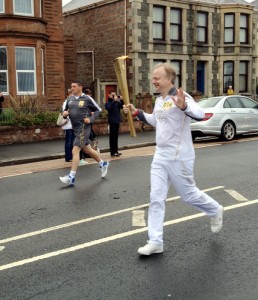 So while the Olympics are happening far away they were, if only for an hour, part of everyone here’s life.  I greatly enjoyed it and the chance to see the ‘torch’ in person and for the children it was the culmination to a week of school based preparation. 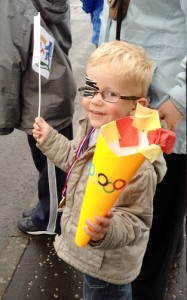 The Warrior having Fun!

Oh…and I got a little bottle of free Coca Cola.  Nice and Sporting.