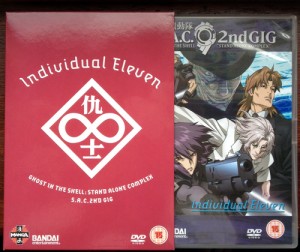 After my review of Laughing Man from the Ghost in the Shell (GITS) series of anime I took the chance while up in Ayr this week to go back to HMV and seeing what else was in their bargain bin.  Again I have to wonder how long this store will remain in business as it only has very expensive and very cheap items with most of the expensive ones being fairly pointless like ten different kinds of headphones.  Lady luck was with me and as you can see above the condensed series follow up to Laughing Man was there on the shelf.  At only two pounds it was well worth getting even if it turned out to be no good.   I bought this one in the full knowledge that it was a near three hour movie version condensed down from a 26 part series.  Pricing on the boxed set for the series was a lot more running to about forty pounds so I gave that a miss.  So again Sunday seems to be my movie review day while it is quiet.  I have just finished watching this movie…how was it?

It is two years since Section 9 helped topple the corrupt Japanese government; Yoko Kayabuki, the incumbent Prime Minister, restores them to their position as an official law enforcement unit.
Section 9 are later recruited by Kazundo Goda, head of the Cabinet Intelligence Service[1], to intercede in an incident involving social refugees. The operation ends badly, straining tensions between the refugees and the government to breaking point. Over time, it becomes increasingly clear that Goda is manipulating Section 9 to suit his own personal agenda. Undertaking a risky plan to infiltrate the CIS’s computer database, Major Kusanagi uncovers evidence implicating the CIS in terrorist activity. Shortly thereafter, a terrorist organization called the “Individual Eleven” (responsible for a string of violent attacks on Japanese citizens and an attempt to assassinate the Prime Minister) commit mass suicide live on television news. Believing that he was responsible for the horrific incident, Section 9 turns its full attention on Goda. While investigating a nuclear excavation project, evidence is found linking Goda to the Individual Eleven.
The refugee population, led by the charismatic Hideo Kuze, declares its independence from Japanese authority. The military responds by dispatching both the army and navy to the island of Dejima, where the refugees have settled. In an effort to prevent a civil war, Prime Minister Kayabuki publicly announces plans for a United Nations intervention. Chief Aramaki, meanwhile, orders Major Kusanagi to infilatrate Dejima and capture Kuze.
Kusanagi succeeds in finding and capturing Kuze: before they are extracted, however, they are trapped under a pile of rubble created by a stray missile. Before being rescued by Batou, both become aware that, as children, they were the only survivors of the plane crash that left Kusanagi in a coma. Meanwhile, Goda arranges for an American submarine to launch a nuclear missile at Dejima. Section 9’s Tachikomas manage to intercept the missile, but in doing so sacrifice their artificial intelligence.
Goda reveals his intention to defect to the American Empire and is confronted by Section 9. He cannot be arrested, he claims, by way of a legal loophole; Kusanagi, acting on the orders of the Prime Minister by way of another legal loophole, shoots him dead. However, she is too late to prevent Kuze being executed by the CIS while he is held in custody.

That is the gist of the plot.  The animation is just as rich and thickly laid as the previous condensed movie and is in places a little better.  A noticeable difference is in the music.  There is a lot more music in this movie than the previous one and like last time I watched it in Japanese with sub titles.  The music is always rather odd, happy jolly tunes during a vicious knife fight, to those used to American action films but the tunes are well composed and add to the atmosphere.

I have to say that this movie offered me less than Laughing Man did.  The Individual Eleven is a political thriller and as such has a rather complex plot and aside from several small action sequences throughout this movie is mainly conversation.  But it does contain quite a few frankly excellent sweeping cityscape views of the megacity where the characters reside which I watched back a couple of times.  There is little look into ‘ghosts’ or cyberbrains or what it is to be a cyborg but then this was well dealt with in Laughing Man.  There is a short sequence towards the end where a character called ‘Proto’ who I had assumed to be human throughout the movie is shot and revealed to be a ‘Milky Android’ a creature not like a cyborg and never human but artificial none the less.  Unexpected but a nice addition to the film.

The villain of the piece Gouda is a second rate foe and one of the main characters even says so to his face!  Compared to the threat of the Laughing Man, Gouda is not much of a match but I do not think he was meant to be.  Gouda is a ‘trigger’ character to set events in motion and bring about the potential nuclear annihilation of millions of refugees as is the point of the movie.  The real villain is the system, politics, inter-government relations and personalities which combine into something which bullets cannot correct.  The other character of importance is Kuze the ‘leader’ of the refugees.  Kuze is the target of Section 9’s attempts to resolve the threat.  He is a full military grade cyborg who just soaks up bullets.  A former soldier who retired from the world Kuze is attempting to link millions of minds to his own through a ‘hub’.  Drop a nuke on the refugees and Kuze will ‘evolve’ them into a new ‘net’ being.  Very similar to the Japanese Kami beliefs.

In conculsion this movie to me is not as good as the previous one but that is only my opinion.  I prefer action and technology in a plot over really intense political theory and there is a lot of this here.  It is well worth seeing if you have seen Laughing Man and would like to know more without the expense of buying the box series set.