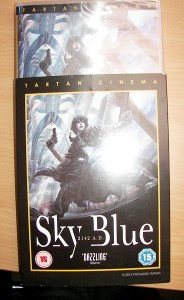 I picked this DVD up on a whim some time ago and at the time the few pounds it cost me meant that I did not even look at the box too closely.  I was taken in by the beautiful stills from the animation and the basis of the plot.  What I did not notice was the fact that is not Japanese it is in fact from South Korea.  Would this make a difference, would it make the film less appealing due to a different set of cultural values and norms compared to those of the more familiar Japanese?  Well to find out I had to watch it so in the early hours of Monday morning I did just that!

First off watch this trailer on YouTube.  This is one of the most visually awesome movies I have ever seen and I did stop the film several times to spool back to re-watch sequences just to see the superb backdrops.  I learned that Sky Blue (called Wonderful Days upon its initial release) took seven years to make and it shows.  A very high level of detail and what I can see was at times painstaking animation gives this film a hyper real look at times.  So overall it is well worth watching from an aesthetic point of view alone.  The Korean impact on animation across the world is massive (animating most programmes including The Simpsons) and it makes sense for them to want to move out of Japan’s shadow and establish a reputation for their own work.  Technically they have done this with Sky Blue; but only for the animation.  Why?  Because the plot is turgid.

Set in the year 2140, the familiar tale follows life in the city of Ecoban, a technological haven on an ecologically ravaged Earth. Humanity has been divided into the rich elite, who live inside Ecoban, and the refugees, who are forced to scrape a living outside. It’s a balance that the elite are happy to continue, especially since Ecoban’s ability to convert pollution into energy gives them a vested interest in doing nothing about the state of the planet outside.  Events finally reach a crisis point when a mysterious figure breaks in to Ecoban and tries to obtain information from the city-controlling Delos system. For city guardian Jay, the stranger is a face from her past that causes her to question her loyalty to Ecoban. The childhood friend she had thought banished forever, Shua is also the grandson of Dr Noah, the genius responsible for Ecoban’s creation. Now he is out to try and fulfil Ecoban’s true purpose, and maybe exchange the permanent clouds of pollution for blue skies.

That is the plot and it is a stock cyber dominated post-apoco world with clichéd Japanese ports such as the sexy doe eyed heroine and the stylised hero with the hidden past adding nothing to any of them.  It is a shame actually as with a little more thought and perhaps a British or American writer they could have had a plot to match the visuals.  It is not a bad plot but it belongs to the 1980’s it is so staid in comparison to current anime.  I will also mention the dubbed English version which is poor and not well matched to the dialogue.  Better to watch it with sub-titles.

So Sky Blue 2142AD is worth watching, worth a few pounds to own but not worth the four to five times that which anime stores want for a copy.  In wargaming terms Ecoban provides a nice if not novel setting for 15mm or 28mm science fiction skirmish.  Pick it up from the budget bucket.