I really do need to keep track of time.  Really I do, as I seem to have lost a couple of months.  I blame the summer holidays from the schools.  Having the three little demons at home has thrown me for six and no mistake.  My own work output has dropped by about half over the last eight weeks.  Leaving aside the fact that I personally think that eight weeks is WAY too long for children to have off school (poor overworked teachers they say, what about all of us who work on while they relax for twice the time I get off in a whole year!) my reason for this post is to announce a return to normal once more with my next project about to go on general release as of the end of this week.

This follows up on the WIP posts from back in May.  Have a read of those for the concepts and so on behind the USE ME Starter Packs and the over all plan.  But DOOP32 (catchy eh!) is all you need to play in a handy box which, trust me on this, is really good for carrying about your current Flintloque project too.  A rulebook, two dice, twenty seven miniatures and twenty seven bases along with a set of sheets with three scenarios and rosters.  The miniatures are from the HOF range and the SHM range and include some crackers such as the Prang that Eli Arndt designed for the range. Packed full of Fun! 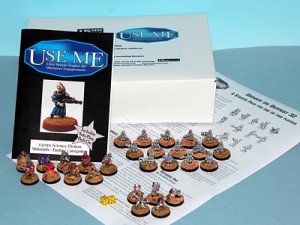 You will be able to see more images once it is uploaded to the site along with a link to download a PDF of the included sheets, so you can read them and use them if you already have the rules and miniatures to hand.

DOOP32 was a small project that came about due to some conversations mainly with Chris Knowles (head blogger on Dropship Horizon blog) and a few dozen requests from customers who desired to get a whole game in a box for USE ME.  It was about fifteen hours work all in.  A testament to the rugged simplicity of the rules system and the 15mm scale.   I do not know how well it will sell but time will soon tell and I await wargamer responses with eager nervousness.  One additional point worthy of mention is that many of the requests for a starter pack was that it be affordable as most wargamers are working to a tight budget these days.  Well I took this on board and DOOP32 is very affordable at only twenty pounds which is spot on budget for what you get.

You can see the whole USE ME Series on 15mm.co.uk.