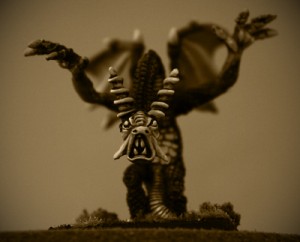 A snapshot taken moments before a bloody and savage death for an intrepid explorer of the wild ways and places.   Rumour has it that this fearsome beast is no myth and poetic imagining but is instead a white metal reality coming this week for pre-order at 15mm.co.uk.  I could not possibly say at this time but perhaps in a few days time….a more in depth look maybe.

For now gaze and long for it…I know I do.

Now I must go a galumphing back to work.

Something I had been working on for several weeks a wee while ago has now become public knowledge so I can mention it on the blog!  Below I have lifted the text from 15mm.co.uk as it saves me a bit of typing:

We are proud and pleased to announce that Noble Knight Games, one of America’s foremost suppliers of wargame miniatures, roleplay games, out of print titles and much more, is now stocking 15mm.co.uk and Alternative Armies products. NKG aim to provide a top notch service and with that in mind if you are in North America please go along to their website on the links below and have a look. You can order HOF,HOT, Laserburn, HOTT Armies, Altuos and all Alternative Armies starter sets and rulebooks like HOF Fire-Team and the USE ME Series. All prices in USD and provided locally to American gamers. If you are a fan of Noble Knight Games and of us as too you can now combine both interests in one order!

Additionally if you can’t see one of our products on the NKG website that you would like to order please email them and let them know!

I am very pleased with this new arrangement with Aaron Leeder over at NKG’s as I have watched his work with admiration from afar for years.  Noble Knight often causes referrals to Alternative Armies. When they, NKG, pick up small amounts of stock (Firefight 1.0, Flintloque 1.0, 2.0, Erin and other miniatures) from their sources and sell it on using their webstore.  Their customers then coming to us directly for more.  Back in the 1990’s Alternative Armies product was in most of the thousands of gaming stores in the USA before the big distributors went belly up.  This results in little amounts of treasure popping up all the time.

Once more the peoples of the USA can access the goodness of the Alternative!

You can read more and follow the links by going to 15mm.co.uk now. 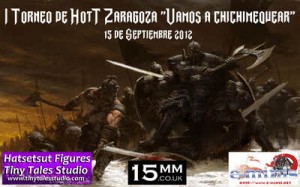 I am pleased to announce that 15mm.co.uk is an official sponsor of the 2012 Zaragosa HOTT 2nd Edition tournament to be held in Spain on 15th September. The tournament is to be held in Zaragosa and expects more than twenty active players on the day. Working with organiser Ignacio Poblador several prizes have been supplied for the winners of the event including two 24AP complete HOTT Armies and some HOT packs of 15mm Fantasy miniatures. In addition to this 15mm.co.uk has supplied a special voucher for all players on the day which will get them 10% off an order on the website.

Here is the information for the event which, along with a transation into spanish will appear on 15mm.co.uk later this week.

Place: The neighbor of the beast, located in Luis López Allué No. 6

Price: 10€ (Payment in hand the same day of the tournament)

Rules:
-Rules, version 2.0.
-We accept all the land available in the regulation unless the BUA.

Army lists:
They will be delivered at the time of registration, with armies of 24 AP according to the rules of the game (12 point maximum in troops of 3 or more AP).

Scale:
The armies must be based for 15 mm scale, its size being that the player you prefer (although we recommend the use of 15 mm or similar).

In case of not having the player of an army, the Organization will have several armies in order to assist participants who have warned him previously. However, do not have strengths for these armies day today, so yes we would need that they trajesen their own strengths (are DBA camps or prepared itself).

Score
The classification will be sorted according to the number of WINS/losses, and in the event of a tie, with the difference between points killed / lost points.

You can view the original page with this information in Spanish here: http://laarmada.info/index.php?topic=19502.0