This week I made a posting here about my Flintloque pin badge which I wore for years at demo games all over the world back in the 1990’s.  There has been a lot of interest from members of the Notables Yahoo Group in my offer to let someone win it and I would post it to them.  So after asking for suggestions how to go about choosing a winner the method suggested by Chris Pryme was chosen and that is for me to note down the email addresses of every Notable who makes a posting between Friday 3rd and Monday 6th August HERE.  I will then randomly select the winner and contact them to ship them the pin.

But what Flintloque related subject should be discussed by Notables to get their postings on the group for a chance to win.  While a message on ANY Flintloque or Slaugherloo subject will be entered I want to make it a little more interesting so I offer a second competition within the first!  I want the Notables to suggest a character profile for an as yet unreleased Flintloque miniature! 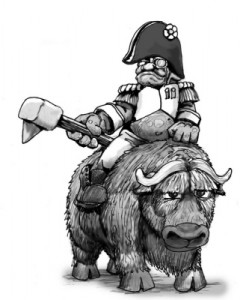 Who is this fellow?

Above you can see artwork of the miniature and below an image of an assembled master casting in white metal.  The miniature is a high ranking Trolkin Officer mounted on a Muskox.

Who is this fellow?

The prize in this second competition is the miniature in question worth about 8.00GBP and not to be released for several weeks yet.  The terms are that you need to post a message on the Notables Yahoo Group between 3rd and 6th August telling me who this character is, his story, an idea of his Flintloque and or Slaughterloo profiles in play.

I will get you started with his name ‘Colonel Skand Stoyne‘.  About two hundred words will be fine.  It does not have to be super accurate or points based as I will choose a winner and assist in finalising the text and so on for release of the miniature.  You can read the Notables Message on this competition HERE.

So you have the chance not only to win an unreleased miniature but also to name it and in the process the chance to also win my personal pin badge!  Excellent!  Get over to the Notables and post your idea!