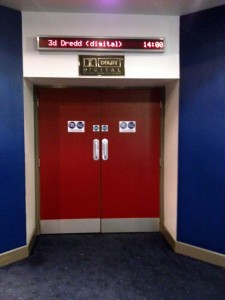 See how little we at Odeon care…not even a single poster to take a picture of!

On Sunday I went to Kilmarnock to see Dredd 3D.  Unlike many others out there I am a fan of the original 1995 Judge Dredd movie which adapted the famous law man from the pages of seminal British comic 2000AD to the big screen. So I was keen to see how the new movie starring Karl Urban as old stony face matched up to it and also to expectations.  Now that I have seen it…how did it match up…was it still…THE LAW!

I had mixed expectations of the new movie.  I had seen two different trailers and a couple of feature clips as well.  These did not make me think Mega City One more Korea and last years movie The Raid Redemption about a team of police who try to clear an entire tower block of criminals one room at a time.  While I enjoyed The Raid (I have not reviewed it due to time constraints, if anyone wants me to please comment) it was thin on plot but super heavy on action.  Since the parts of Dredd I had seen made me think the same I was not sure I would enjoy it.

Well as it turned out I did not really enjoy the movie though the two people I was with did greatly enjoy it.  Why?  I think due to me being very switched on to the comics and the sheer depth of Mega City lore which could have been mined for the movie.  Basically the city was missing from the movie.  Sure you saw Johannesburg with some CGI generated skyscrapers (blocks) and some Judges but nothing of the Mega City I know.  No robots, no Fatties, no Aliens, No Judge Death, no H-Wagons floating on the wind and so on.  This was very much grim and gritty and near future bound.   I felt that Karl Urban nailed the character of Judge Dredd and his facial expressions were spot on.   I was not overly keen on Olivia Thirlby as Judge Anderson but that was more due to her not being a tall blond bombshell who cracks minds with her telepathy, her acting was really good and she humanised the film more than any other character.  That was basically it for characters aside from Lena Headly as Ma-Ma.  Ma-Ma was a villain more filled with promise than results who threatened and acted up without ever really feeling like she was a challenge to Dredd and went out without a whimper.

The film well deserved its 18 certificate as it was very violent with super slow motion gun, explosion and knife wounds on full display.  There was nothing in it that I found shocking though as some reviews have claimed and compared to scenes in most American horror films it did not top or rival them.  Dredd delivered some excellent deadpan one liners that were the highlight of the film for me.  I know it was made a lower budget and for that it is really well executed my hat is off to the director for this.

In conclusion then I would say that 2000AD has now shaken off the curse of the 1995 film but in doing so has lost the core identity of the Mega City.  Aside from the helmets this could have been any other near future action film set in a depressing drab and grey urban hell hole.  Robust, worth watching but without the sparkle that will make it remembered.

5 thoughts on “Dredd among the Peach Trees”