Since I began this blog I have been asked to give an account of a new set of Flintloque miniatures from their deepest origins through concept to greens to white metal and release.  This process often takes six months if not near a year in some cases so it is only now that a project has come along that I have been able to detail in such a manner.  Interested?  Well you should be for this is the stuff of miniature making magic!

Back when Flintloque 3rd Edition 5026 Death in the Snow was published in 2010 the realm of the Witchlands was greatly expanded and among those expansions were more troop types and unit profiles. In the months that followed the feedback from the new book was really good and one of the most talked about subjects was ‘Undead Todoroni’.  After all had the Todoroni of Nepolise not come a long way since the late 1990’s, from a unit of militia to a whole army in their own right with cavalry, artillery and more?  With that army in the Witchlands it stood to reason that there must be re-animated Zombie Toads!  I had come to this conclusion on my own and as a result I squeezed in a mention of the ‘777th Croaked Line’ in the army structure of the Dark Czar.  This mention caught players attention and led me to a conversation with miniature designer and Toad Mad man Rob Alderman in May this year.

As you can see above we came to an agreement over what a potential set of 28mm white metal Undead Todoroni would look like.  Rob’s sketches along with his own and my own input worked out a concept and then a design tender that would meet the needs of fan’s of the shambling dead.  Over the course of a week we batted it back and forth, consulted mortal Todoroni uniforms and other Undead formations and agreed on a total of nine greens to be created.  This took Rob about ten weeks among his other tasks as a designer and working man (he is a busy chap!) with a couple of checks of progress and some images to finalise creative direction.  Once carefully package Rob sent the greens to me at Alternative Armies where they arrived in late August.  You can see them below! 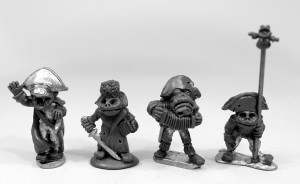 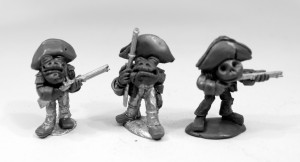 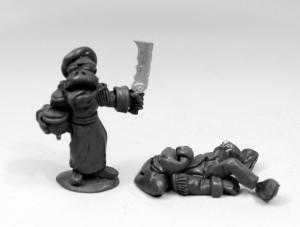 As you can see Rob followed the initial sketches and expanded on them too.  My own input kept his sanity hat screwed on tight and we worked out that in doing a full (and with nine greens it is a full unit) set we would need to provide not only troopers but also the command and the always found Witchlands requirements of a Vampyre and a Liche.  Since no Undead Todoroni exist in the Flintloque range they would also be ‘firsts’.  Details discussed included the style of dress and demenour of a Todoroni Vampyre (slick and slightly camp as it turned out), if a Zombie Todoroni cannot sing like normal Todoroni then what is the unit musician doing (playing an accordian of course!), the standard bearers flag pole topper (a homage to Mad Queen Maria’s glove puppet Mr Froggy).  As well as those we decided to vary the level of decay in the troopers (as in the rules of 5026) and to avoid bayonets as many gamers now prefer their muskets bare.  Late on in the process we decided to drop the fourth trooper and replace it with a unique and new miniature for the Undead…a Zombie Todoroni Chef!  Why..well humour of course, it is Flintloque’s goal.  The last addition was a dead Todoroni.  This figure has several purposes in that it could be a dead mortal Toad (battlefield marker) or a corpse ready for re-animation or such.

So that is it for the initial stages of this new set of miniatures.  Any questions just post below or email me direct.

This is the first of several postings on the ‘777th Croaked Line’ and in the next one I will be detailing the master molding stage and white metal ‘tins’ along with an account of each pose.