One of these days I will manage to post on the day of an event or at least the next day!  Anyhow it matters not and I still want to tell you all about what the tribe and I did last Saturday; attending the Wigton Book Fair.

Wigton is an hours drive from Girvan so not that far by these parts and the weather was fine so the journey went well.  Wigton is Scotland’s national book town meaning that it is home to a very handsome group of bookshops arranged around the town square.  Wigton itself is of the same size as Girvan with a similar population and all in all is just as pleasant a place to spend a Saturday.  Those who know me will know I own a collection of some thousand books mainly on military matters and science fiction but also some rarer titles and a the finest collection of text on the Japanese nation to be had outside of Glasgow University.  I adore books and if possible try to get to these sorts of events if work, three children, distance, funds and the gods allow it.  So it was a wizz and a wheeze for me to make the trip.

I took some pictures and I will run you through them as this posting progresses. 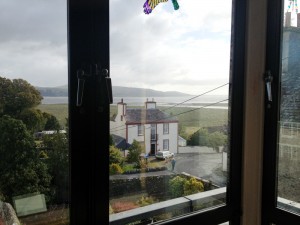 The view from the rear of the library

Upon our arrival we decided to visit the town library which is a towering four story stone building that tells of a time when Wigton was much more than it is now.  The above shot is from the upper floor out over the landscape to the wash of the sea.  Very impressive and the picture does not do it justice.  The reason for the visit to the library was two fold.  Firstly to get tickets to ‘Horace the Haggis’ for the kids and secondly to see the exhibits on the top floor which included a reconstruction of a Victorian Gentlemans Study and letters from the First World War, one of these you can see with a book in the second image. 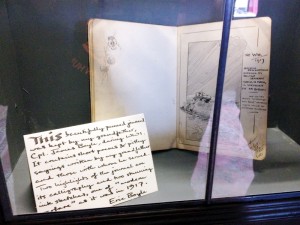 While in the library the children made little figures of ‘mankind’ using clay and I had a look about.  What struck me the most was the level of activity from literary bloggers who were getting photos for the local news and for the internet.  Always one to observe the observer I took the photo below of a BBC fellow taking shots of other visitors.  Not to worry though when he approached me I said…’oh, you don’t want my picture..it would break your lens!’. 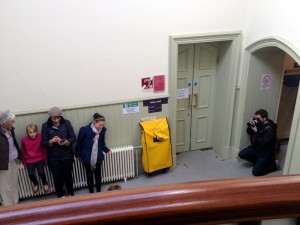 Outside of the library we enjoyed several nature events in the open ground next to the bookshops and then some freshly made cinnamon infused donuts from the food tent.  My middle son ‘The Poet’ had a really good time with an Owl science experiment to find the bones of mice in the remnants that the bird left behind.  Not my idea of fun but he enjoyed himself. 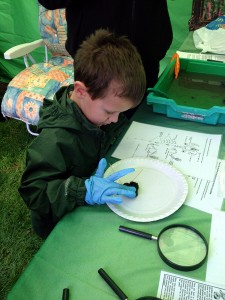 Owl Fun for the Poet!

The tickets we got for ‘Horace the Haggis’ was for a reading of a new childrens’ book by Sally Magnusson who is a newsreader for the BBC here in Scotland (her father was Magnus Magnusson of Mastermind fame).   I did not attend the packed event but instead went for a wander around the book shops (funny that eh!).  The kids had fun though and the appearance of the Haggis itself at the end was a joy to watch, a real pantomime moment.  The Poet got himself a signed copy of the book which has been read to death this last week. 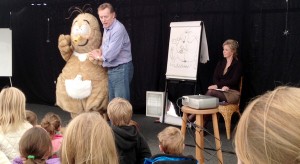 Sally and the Haggis

As for myself I left Wigton with three new books.  One on Arms & Armour (which has some nice colour images) and two on the Napoleonic period (surprise!).  The first titled ‘The Hussar General’ about Blucher the Prussian commander at Waterloo and the second a detailed account of the ‘Convention of Cintra’ a real low point in the Peninsular War.  I have made a start on the Cintra book but work keeps me too busy for extended reading.  Be assured though that if possible we will be going back to Wigton again soon.