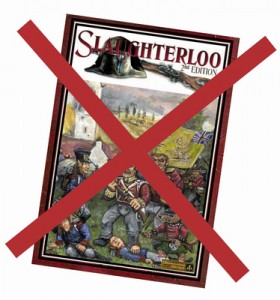 I had been watching the shelf for near a year but it finally happened last week…Alternative Armies sold its last stock copy of Slaughterloo; that being the boxed set of three books and card sheets released in 2006.  A while back at a company meeting it was agreed that when the day came we would remove the game from sale for a month and then bring about a new version.  This was going to be a new edition but progress has been halting and there is no rush as the existing mechanics of the game are excellent and vastly more than the old first edition.  I can almost hear you all now reading this and saying ‘what no more Slaughterloo..you devil..why?  We love that big battle wargame’.

Fear not!  Slaughterloo will continue.  In fact it will do so at Christmas of this year for at this very moment I am working on ‘S2 Redux’.  That is a new run of the game.  Same mechanics, same rules, same content but in a different format to the box set.  Coded 5030 Slaughterloo will become a single thick book along the same lines as Flintloque 3rd edition became in 2009.  Bigger than any one Flintloque book this one will contain all three of the box set books with updates in the army stats tables to account for the passage of time.  All of the cards, tokens and so on to play the game will be in the book for photocopy and personal print…but also on the Alternative Armies website as free digital downloads.  Excellent value and all in one place.  Sneak peek below of the new cover with brand new artwork by Edward Jackson and logo by Sam Croes. 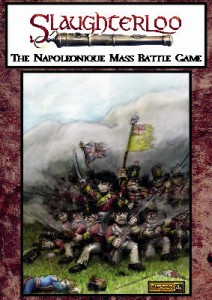 More on this on Barking Irons Online nearer the time.