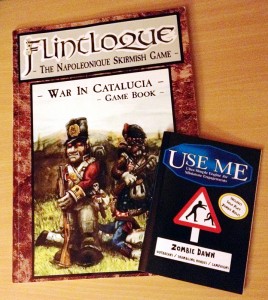 War in Catalucia and Zombie Dawn

After a busy weekend on the website of Alternative Armies and 15mm.co.uk I went into work to find that two of my titles had sold out their current print runs.  The first third edition game book for Flintloque and the ninth title in the USEME series too.  Both of these will be out of print for a while as I have to organise re-prints but both will come back into stock as they are core books and popular sellers.  Indeed War in Catalucia will be in its third print run when brought in again and the total number of USEME booklets sold is nearing four thousand now.

While Zombie Dawn will be brought back into print just as it was there is a chance that I will take a few days to ‘update’ War in Catalucia.  That does not mean any changes to the mechanics of the game (third edition is the most awesome incarnation of Flintloque ever as it is) rather some more background material and art taking into account the three years since release with more stats and army list information and the like.  More as and when as normal on this.

The winter of 2012 and into this year has been good for Flintloque and USEME with new players taking up the offer of a free limited miniature called Gerrrard the Wolf and the masses of content on Barking Irons and the great new Orcs in the Webbe.  USEME continues at a pace with weekly messages stating ‘release more titles!’ a firm favourite.

Thanks to all those who bought my work!