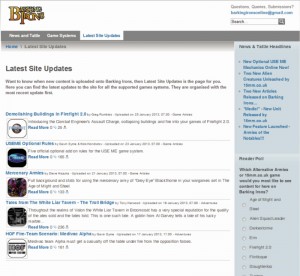 The Latest on BIO as of the weekend…its updated already since then!

Back in December I took part in the now annual Alternative Armies interview for the Orcs in the Webbe advent calendar.  In that interview I was told that Craig Andrews, owner of Orcs in the Webbe and editor of Barking Irons Online, would be making a planned effort to kick the volume of content on Barking Irons up a notch.  Well its now late January and Craig has certainly met his goal!

I contribute content to Barking Irons when I can.  A lot of this is done in time time off work or at the weekend (yes, I don’t sleep much!).  Now its not as much as I would like but I am only human.  Craig has taken my work along with that of a dozen others and planned out news, reviews, articles and scenarios for half a dozen game systems published by Alternative Armies and 15mm.co.uk.  My latest was a HOF Fire-Team scenario you can find notes for on TTWG blog but only yesterday an excerpt from The Trolls of Valon from 2012 was put up too.   I am very impressed with Craig’s dedication to wargaming and to me as well.  Add to this that he holds down as full time job and has just successfully moved from Birmingham to Bristol and you have a chap who can spin a lot of plates while also maintaining a formidable online presence.

There is no doubt that Craig Andrews is the soul behind BIO and that I among the hundreds who regularly look to Barking Irons for their gaming material each week are looking forward to what will happen in the rest of 2013 and beyond with this online magazine.

Craig is going to be looking for voluntary funding for OITW to cover his costs.  I have told him privately and will now state it publicly that Alternative Armies will contribute largely to this in supporting OITW.  OITW now also covers other game systems in the ‘black powder fantasy’ wargaming genre created by Flintloque so I hope those other brands will also assist Craig and that this will meet his needs.

Keep it up Craig!  Keep the Flag Flying.

2 thoughts on “Craig Andrews kicks it up a notch on Barking Irons!”