The concept of limited edition miniatures is nothing new.  In fact Alternative Armies has had them for twenty years now in 28mm scale and other brands longer than this (remember those awesome 1980’s Citadel limited runs including Space Marine Santa’s and the like?) but they are seemingly always of the 25mm and 28mm scale of miniatures.  I have had a dig around and found literally nothing limited in 15mm scale.  Why is this?  Is it because there is no interest?  Is it because until recently 15mm did not have the same glamour as a scale as 28mm?  Is it a cost issue with money making not being possible with having a sculptor make a 15mm that sells at a relatively low price only for a few hundred castings or so?  Or is it simply something that no one has thought of yet as the wargaming hobby endlessly repeats itself with the same cookie cutter ideas?

Well in response to these self set questions I can offer some self decided evidence answers.  I think there is interest as many wargamers play 15mm scale, more now than ever before especially in the genres of Science Fiction and Fantasy and some of those wargamers will want limited’s as they do in the larger scale; stands to reason.  Certainly 15mm had nothing like the presence it has now only seven years ago when I founded 15mm.co.uk and brought Laserburn back to the wargames table so maybe its not come up before.   As for cost and money making this is different for every company but I think, having bashed the calculator keys, that as long as the run was of the five hundred or so mark it would be profitable so no get out clause there.  Has no one thought of it yet?  Well I admire companies like Critical Mass Games, Ground Zero Games and Khurasan Miniatures but they have no limited codes in their 15mm that I could see so perhaps like the rise in popularity of the scale it has not yet evolved as something companies do who produce that scale of miniatures will do.

This is something I have been thinking about for over two years.  In fact it was near the top of my brief while I was musing on what would become the new Ion Age.  Much like my idea to create the SHM Range on 15mm.co.uk which gave aspiring sculptors their chance to get something release when no one would take them seriously (which has been rather successful with more than seventy designs and a dozen designers to its ranks) I decided that I would give it a try.  After all without some fun and a sense of adventure what is the point of this hobby?   The Ion Age would be the perfect testing ground.

What would such a limited miniature probably be and how many would be produced?  Well I knew it would be produced in a run of 500 numbered packs that much was based on the hard numbers.  It would have to be TWO miniatures not one, to make the bulk up for packaging; that was a change over 28mm scale.  As for what it would depict I followed the same outline of rules that I have for Flintloque.  That being interesting characters but nothing unique or vital to a wargame system.  Purchase would be from interest and a sense of collecting NOT out of a resignation to needing the figures to play a certain mission or personality…that is cruel and something other much larger companies do.  So it would be a character officer to lead a lance or more of Retained Knights.  A perfect jumping off point to see if the concept had legs and would run! 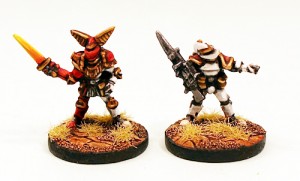 The Ion Age will be releasing its first limited edition packs of 15mm characters towards the end of this month.  The pricing will be slightly more than the normal but not much and this is really only to cover the extra packaging and manpower this type of code needs as with all limited codes.  You can see IAFL01 above.  I will tell you no more about these two fine fellows just now though…you will just have to wait!

If you have any thoughts on this idea please do email me or comment against this post.