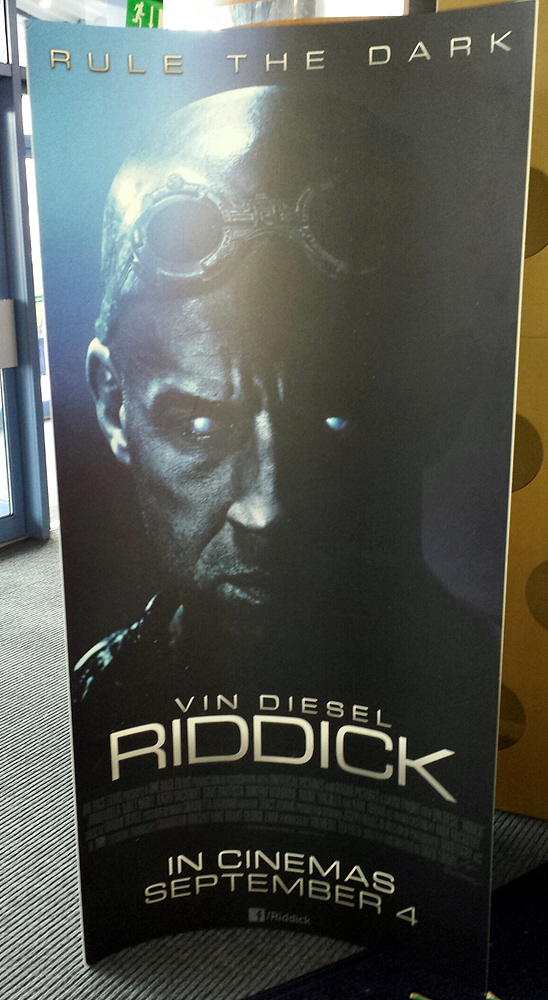 I have known Mr Richard Riddick since Pitch Black way back in 2000 when both he and I were quite a bit younger and fitter.  Don’t get me wrong I took my one day off this week and went to the cinema to watch ANYTHING, I just wanted out and about as they say.  So standing in front of the boards looking at what was on at the Odeon only one film jumped out from among the sugar soaked, the digitally cretinous and the British made luvvie fan club and that was Riddick.   As is my way, and you might have guessed, I pay literally no attention to trailers and I don’t read reviews until after I see something so that I can go in fresh with no spoilers.  So tickets were bought (ouch!) and in myself and my good lady went.

Was Riddick any good?  In short yes!  I enjoyed it.

Riddick is a stripped down lean B-Movie of the kind that made Predator and Alien such successes.  Its not on a par with those movies by any means but it has the same narrow focus and small cast with a linear plot structure. It has plenty of action, it has decent special effects.  The characters are all good fun even if their dialogue is of the worst cardboard cut out variety.  Its not trying to be something that it isn’t and this made me happy.  Riddick cracks along at a good pace and it twists and turns often enough not to become boring.  In fact kudos to the film as for really its first third there is no dialogue at all and only the main character on screen as he makes his way on a hostile planet (all non urban planets in this universe are hostile in these movies) aka Robinson Crusoe.  I will not spoil the plot but I will say that the three thirds of Riddick centre around firstly isolation and survival against the wild, secondly the hunt and survival against Humanity and lastly a third of survival against monstrosity.

Special mention must be given to Katee Sackhoff’s breasts which are seen in the film and as a married man I must describe as ‘very nice’ and nothing more but honestly its a naked woman and most of the online commentary about the movie is about this and nothing else.  Which is sad really, its an adult rated action film what do you expect!  Time to offend those who like to be offended me thinks.

Lastly this movie would make a superb series of 15mm or 28mm scale wargame skirmishes so if you are a fan of sci-fi gaming then have a look at it for that reason alone.  The grav bikes are really nice as are the space ship designs and sentry pods and so on.  Good technology for those who like to look at that as well as the naked ladies.

The same lead actor, the same basic plot, the same director.  Riddick goes back to what made Pitch Black excellent and largely succeeds.  Go and see it if you have the time.