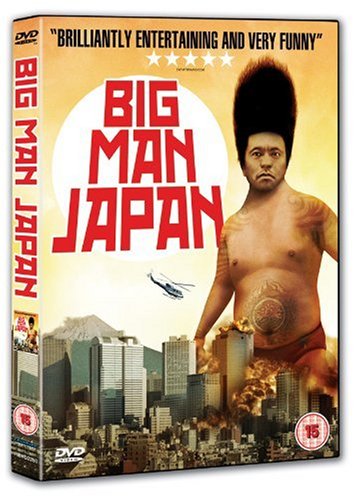 This is not one of my normal reviews of a Japanese movie or anime.  Oh, no.  This is something far worse that I subjected myself to this weekend and kind of regretted it aside from a couple of moments of real genius in film making.  But hey, for a fifty pence download I gave it a Sunday morning go.   What I am talking about…Hitoshi Matsumoto’s Japanese mockumentary send-up of monster movies: Big Man Japan!

The Japanese are a unique people with a real passion for the creative arts but they sometimes create things which to a non Japanese (even someone like me who has studied that nation for years) comes across as utterly surreal.  Big Man Japan follows Matsumoto’s Masaru Daisato, an unassuming, sad man living in a Japanese slum.  His wife has left him, taking his daughter away, and he is despised by the people of Japan.  Why?  Because he carries on the tradition of his forefathers as a protector of the country.  Unfortunately, this involved being zapped with electricity and growing into a giant man in small shorts who fights odd monsters who attack the country.  These monsters are nothing like Godzilla and are in fact downright weird including a head atop a leg, a monster that throws eyeballs, a white and black rubber band man monster who has a comb over hair cut and many more.  The film cuts back and forth between fight scenes (highlight of the film) and Daisato and his dull as dishwater, crappy life.  The pace of the movie is all over the place and it is badly let down the by overly long and badly done ending tribute to Ultraman fight which as well as being shockingly shoddy is overly long and too violent to be funny (at least to me).  The film ends with a conversation over dinner between monsters and Big Man…well no idea there.

Below are a couple of You Tube links.  Be warned this is not for kiddies (due to its lack of sanity) but they will give you an idea of what this is about.  The first one is the trailer, the second one is one of the weirder fights with the rubber band comb over monster.

You can get the film from Amazon for a few pounds in the UK.

Lastly the moment of genius…what is it?  Well just before they blast Daisato with electricity in a Hammer Horror esq sort of way he stands inside a vast pair of underpants which he then grows into!  Only in Japan would you see that.  He might be mad and crude and weird..but he can’t be butt naked!

Watch it or don’t…but if you understand it..let me know.  🙂