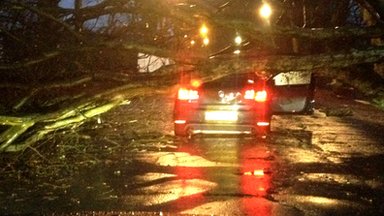 I am typing this post between the roar of the wind and the losses of electricity that have been battering Girvan since late last night.  Although the weather service did warn us all that high wind was to be expected I think the country got more than it was expecting.  Early this morning the power went out but not before the local radio reported that the Scottish Government had upped the yellow weather warning to a full red top level alert.  By that time the whole rail network had closed down, part of Glasgow Central Station’s roof fell in and many roads were shut with fallen trees and tipped over vehicles.  Girvan primary school was closed and going to work impossible due to the debris and high wind.  See the BBC for more.  Look at this video for what is happening in South Ayrshire. 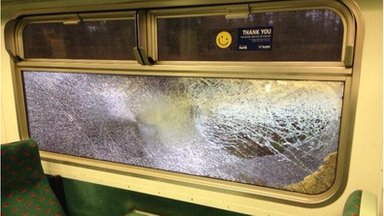 Scotrail Train with a broken window

What does this mean.  Well it means no work today and maybe not on Friday depending on the damage and the roads.  No email from me and while I did manage to get The Ion Age release out for today I did that on battery power on an Ipad! No orders will be leaving Alternative Armies, 15mm.co.uk or The Ion Age until next week (I am told Royal Mail has stopped for the moment too).  Apologies to all but there is not much I can do about this….

Its not been a good week for Central Scotland really.