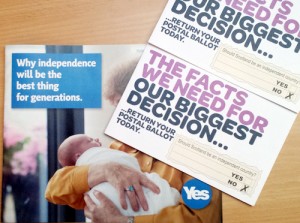 I had planned a long blog post here outlining the YES and NO campaign’s leaflets now that we are entering the end game period.  Leaflets that layout why you should vote yes or no.  I was then going to follow it with a run down of the last TV debate two nights ago and end with my own take on the referendum at this stage with only weeks to go.  BUT.  Life gets in the way.  I don’t have the time.  Various projects at work have me running at 95% of full and added to this a bulk of email to answer means this is all the time I can spare.  So it will have to do.  Typed and posted so my apologies for grammar errors and such.  These are my own thoughts.

The debate was much like the last one with Salmond the showman dominating while saying little.  Darling held his own for most of it but its always hard to argue for NO on any topic rather than YES.  There was actually little said except on the issue of currency.  This was actually explained finally and it runs like this.  If the vote is no then everything remains as it is with a hint of more devolved powers.  If the vote is yes then the preferred option is a currency union with the rest of the UK with the Bank of England being Scotland’s paymaster.  Will this work, well its frankly insane to me to think that any Prime Minister will just kick Scotland out and by denying Scotland its share of the sterling assets will remove its share of the UK’s dept.  So that being assumed I think a currency union would happen but it would not work.  After all its done nothing for nations that use the Dollar and its been a bane for Greece being controlled by Germany in the Euro Zone.  Therefore after it breaks down (Salmond tries to explain why London will not give Scotland more money etc) the options are joining the Euro or a separate Sterling Pound (like before the Union).  The Euro has been ruled out (but trust ye not any politician for I think Salmond would run for Brussels given a chance) and my own thinking here is that is a good idea as its a sick man as it were and its not going to last as it is.  A new currency for Scotland would be really hard as Edinburgh has no history of credit, no gold reserves and so on.  We would be starting at the bottom.  So the debate was just like the rest of this process…loose and ongoing.

The leaflets I have pictured above are the last national printed communication for each side and its telling I have had to try and make people read them.  As you would expect NO focuses on what we know and the fear of the unknown.  YES focuses on what we could do without the solid facts for it.  As publications go the YES one is better as it gives you more information and it has the ability to dump on the NO campaigns failures over the last 300 years too. What is noticeable in the leaflets is that YES focuses on children and the young and NO pretty much focuses on the older and pensioners.  So again fear vs optimist and youth.

I understand that people will disagree with me on this and I EXPECT IT as there is nothing solid here only opinions.

My take on this at this point is that its still all to play for.  While YES seems to be winning and is way more vocal its vital to remember that its s tiny minority who are online and in the media or on Facebook or Gplus etc. The majority are silent and I think that silence is more NO than YES.   I have not decided what I will vote as yet and I will admit this is tearing me up.

Another post on this nearer the time of course.  I am of course concerned as I am one of those rare creatures now…a man who makes his living publishing, manufacturing and exporting to the world.  A money maker, a wealth creator.  It will affect me in every facet of life.