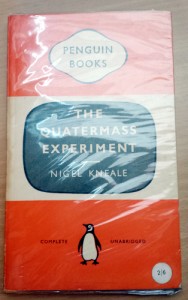 While out and about I managed to get a little steal of a book.  Its an original 1st edition print penguin from 1959 in excellent condition of The Quatermass Experiment by Nigel Kneale.  Its a script not a novel as the Quatermass Experiment was a six part ground breaking television mini-series in the 1950’s broadcast by the BBC.  For those interested in science fiction and especially British science fiction this series was vitally important for the future creation of not only Doctor Who but also films such as Alien and series like the X-Files too.

The book itself is not very impressive by modern standards.  It is very much a product of its times much like the story is.  Drab, plain and poor the book gives off an air of a time when things were grim and tight and also grey.  But it will be great fun for me to write the scripts for its been many years since I saw Victor Carroon slowly change into a monster.   I saw it on TV as a child of some ten years old back in 1980’s and its fair to say it left as big a mark on a young me as Robocop did and Aliens too but in a different way.  A creeping horror of change and alienation too.  The final cathedral scene I know almost word for word.

If you have not heard of or seen Quatermass then I suggest you do.  The book might be hard to get but the TV serial is out there and BBC4 made a single new episode in 2005 which is also very good.

I could not find another of this book for sale online at the time of writing this post but an estimate of its value compared to others of the time would be eighteen to thirty pounds.  So I am very happy and the book is an excellent aesthetic object too.