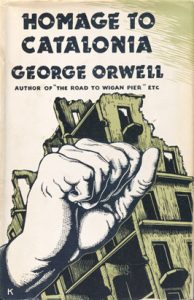 “I have the most evil memories of Spain, but I have very few bad memories of Spaniards. I only twice remember even being seriously angry with a Spaniard, and on each occasion, when I look back, I believe I was in the wrong myself.” – George Orwell.

I have been a long term reader and fan of Eric Blair (George Orwell) ever since I was a teenager.  Not the Orwell of 1984 or Animal Farm but rather the earlier man of essays and of books such as Road to Wigan Pier and Homage to Catalonia (not to mention the sublime Down and Out in Paris and London).  Time permitted me to read Homage to Catalonia over the last week during a time of great joy and a friend’s wedding celebration.  It is a book well worth reading if you are interested in several different aspects of life, politics and writing.  It is auto-biography, it is a war memoir, it is a social account and it is a man’s take upon the Spanish Civil War.  Read Orwell and learn about the workings of the world.  Here are some thoughts and if you want to get a copy of this book it is very easy (not the first edition above!) it can be had for pennies from bookshops and elsewhere as it has been in many editions.   My own is in the bin now, water damaged and smelly it was due for composting.

Orwell went to Barcelona in 1936 to report on the Spanish Civil War. He was so struck with the progress of the workers’ revolution there, the camaraderie and the hope, that he decided this state of affairs was worth defending, and enlisted with a militia unit. His unit soon went to the front, where it stood nearly idle for several months and did little fighting. The unit returned several months later to what seemed like a different city, in the throes of inter-party fighting as the Russian-backed communists attempted to take control of the war effort. Orwell’s unit returned briefly to the front, but while he was hospitalised (due to a bullet caught in the neck,) its members were declared illegal, and he was forced to flee the country.

Most of us are more familiar with the Spanish Civil War through Hemingway’s For Whom the Bell Tolls. Unlike that novel, Homage to Catalonia paints an affectionate portrait of a brave, but naïve, effort that was doomed from the start by international intrigue. Orwell’s affable co-combatants are poorly equipped, crawling with lice, and little interested in fighting, which is lucky because they’re left on an immobile front where if the food isn’t great, the cigarette ration is at least adequate.

This book is indeed an homage, to a brief time in a small place where equality was real, but fleeting, and to the people who were there to live this hope. It also shows us the moments when Orwell became disillusioned with communism, leading to his best known works. (It may difficult for us to imagine, but we need to keep in mind that in the 1930’s, the violence and cynicism of the U.S.S.R. were still widely unknown, and there were many active communists all over the world.) Thus, this book, in addition to being highly enjoyable, is vital to understanding a mindset now remote and alien to us, and a time we mostly know nothing about.

Well worth reading and in case you wonder…the world is not so different now.  Be careful what second hand accounts you believe.